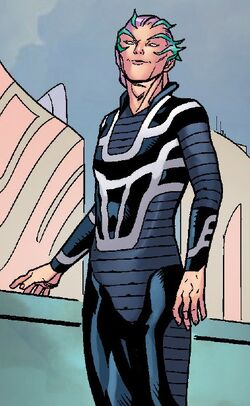 Hermes is a member of the Olympians a group of humanoid beings that hail from the pocket dimension; Olympus. He was worshipped by the humans of Ancient Greece and the Roman Empire. He was the Messenger of the gods;[1] God of speed,[2] travelers,[1] travel,[3] commerce,[3][1] and thieves.[4]

Hermes was the son of Zeus and the nymph Maia she gave birth to Hermes in secret.[1] She raised him, although due to his speed, she was unable to see that he sometimes left her side to steal the cattle of his half-brother Apollo. His brother forgave him and presented him wit a Golden Lyre. On becoming an adult he was taken to Olympus and appointed Zeus' herald delivering messages between the gods and mortals.[1]

Hermes had a son, Autolycus,[1] who became the god of thieves.[5] The Eternal Makkari was often confused with Hermes (Rome name Mercury).[6]

In 146 B.C., the Romans conquered Macedonia and then Greece. They even adopted Olympian Gods, changing many of their names in the process. Hermes became "Mercury".[9]

Hermes passed messaged when the Olympians went to war with the Asgardians.[10]

By the 1940s, Hermes accompanied the other Olympian gods under the temporary leadership of Aphrodite, then going by her Roman name of Venus, as she relocated Olympus to the planet named after her.[11] Hermes was then known by the name of Mercury. Soon, Zeus returned.[12] Now calling himself Jupiter, Zeus summoned Mercury to collect Venus from Earth after his daughter Joya accused Venus of turning against her godhood for the love of a mortal. Hermes traveled from Olympus Realm to Earth and brought both Venus and her mortal lover Whitney Hammond to stand trial.[13] Venus eventually won her right to return to Earth.[13]

In 1950, Mercury was ordered by Jupiter to assist Venus on two separate occasions. The first was when Venus and rocket scientist Randy Dover were trapped on the moon. Mercury used his strength and speed to hurtle their damaged rocket back to Earth.[14] Later, Mercury was ordered to bring Venus to the laboratory of scientist Michael Templar who was responsible for creating a device that was pulling the Earth into the sun, a situation Venus helped reverse.[2] In 1951, Mercury learned that Venus was prisoner of Sultan Khorok of Cassarobia. There Olympians couldn't use their powers, thanks to a spell cast on the area by Asgardian god Loki. However, Venus managed to escape to Olympus in planet Venus. There Mercury and Jupiter tried to persuade her not to return Cassarobia. Still she returned to her imprisonment because she didn't want to desert lovers with whom she has befriended in there. However, Loki was convinced to lift his spell and Venus managed to overthrow the sultan of Cassarobia.[15]

Hermes was sent on a mission by Zeus, just as Hercules was taken to the underworld.[16] He was a spectator when Hercules battled Thor over the magical pig of Dionysus.[17]

With the arrival of the Fourth Host of the Celestials, Hermes confronted his mirror in the Eternals, Makkari, when Zeus and Zuras disagreed on how to address the Space Gods.[18] Hermes witnessed when Thor received energy from Zeus after he was killed by the Celestials.[19]

Battle with the Avengers

Hermes teamed up on a mission with Dionysus and Artemis to capture the Avengers. Using his speed he took out Captain America and the Black Knight with ease. He also caught Captain Marvel after she was taken out by Artemis.[20] As the Olympians battled the Avengers, Hermes teamed up with Hera and Prometheus to stop the fighting. They took Herc to Prometheus to be healed but when he was revived he went insane and hit Hermes. When Herc snapped back to normal he confronted Zeus and convinced him and the other Olympians to stop fighting and retreat from Earth.[21]

Aphrodite sent Hermes on a mission to find her son, Eros.[22] Hermes was to be sent to Asgard after Hades and Ares' accusation that Thor, the Thunder God had attacked them.[23] Zeus however decided to travel to Asgard himself.[23] Hermes and the other gods attacked Thor after they were attacked by the Dark Gods, believing them to be Asgardians as well, but the truth was revealed and he was allowed to leave.[24]

Hermes and the other Olympians settled on Earth forming the company the Olympus Group. During his time there, Hermes brought word to Zeus that Hercules was performing a new Twelve Labors, but interrupted the sky-father in an intimate moment with an employee.[25] Hermes attended a board meeting for the Olympus Group as Zeus confronted Hera for manipulating Herc. They board voted against interfering with the labors.[26]

Hermes visited Ares when he was living on Earth. He took the form of a skateboarding teenager and harassed him at his job on a construction site. He stopped long enough to ask him to return to Olympus and help battle Amatsu-Mikaboshi. Ares declined as he did not want to leave his son and his mortal life.[27] Eventually Ares joined the fight to save his son, Hermes met with Inari the messenger of the Amatsu-Kami to find ways to trick people into fighting Mikaboshi. Inari came to Olympus and offered help, but Ares refused. When he asked for water, Ares gave it to him. Inari then presented the water to the Amatsu-Kami as a gift from Olympus, and they agreed to join the fight.[28] He also witnessed Alexander, son of Ares, awarded godly status by the Council of Godheads.[29]

When Hercules became mortal he stole various weapons from the armory of Ares. Zeus sent Hermes to find Herc. He went to Dionysus and learned that Herc had been getting drunk at his bar. He then visited Hebe the ex-wife of Herc who tried to remind his that he saved them from the Chaos King. She revealed that he was in Brooklyn and found him at Sunset Park fighting Mr Negative and his Inner Demons. He helped Herc by knocking out the gunmen and freeing the hostages. He later returned dressed as a jogger and told Herc that he would report back that he could not find the thief and accepted that Herc would use the weapons to help mankind.[4]

When the Serpent was awoken, Hermes came to Herc to tell him the Olympians would remain neutral in the situation. He reminded him that he was no longer a god, but made the offer for him to return but he declined. Hermes promised he would return one day to help safely guide his soul to Hades.[30]

Due to the temporary removal from orbit of Earth in the context of a game between the Grandmaster and the Challenger,[31] the Goddess Nyx escaped imprisonment, vowing revenge on Olympus. She arrived with her children and they set out to murdering all the gods that were there. Zeus commanded Hermes to get help, but before he could depart, Nyx's son Hypnos threw sand at him, causing him to sleep, and then stabbed him with a dagger, killing him.[32]

After his apparent death, Hermes and the other Olympians were reincarnated and revived into their "true" forms within the "space beyond space" due to the fact they were fundamental myth aspects of reality and could never truly be killed.[33]

Olympian Physiology: Hermes possesses the conventional superhuman physical attributes of an Olympian.[1] However, some of his powers surpasses that of vast majority of his race such as his speed, stamina, durability, and strength.

Gifted Intellect: Hermes is a wily and crafty deity. He is a giften inventor, credited with creating a lyre from sheep's gut and a tortoise shell.

Master Combatant: Hermes is an extraordinary formidable hand-to-hand combatant,[35] particularly while using his speed in combat situations.[40] He mastered several forms of unarmed combat, particularly wrestling.[35] Hermes was able to rival his skill with powerful foes like Makkari in speed combat.[40]

Hermes possesses the strength of an average Olympian male god, enabling him to lift allegedly 30 tons,[34] 25-to-50 ton (Class 50),[35] or even having enhanced strength enabling to lift 50 tons,[1]

Without the need of any dimensional teleportation device, Hermes is capable of running and flying at warp speeds while using his own power.[35]

Like this? Let us know!
Retrieved from "https://marvel.fandom.com/wiki/Hermes_Diaktoros_(Earth-616)?oldid=6428234"
Community content is available under CC-BY-SA unless otherwise noted.