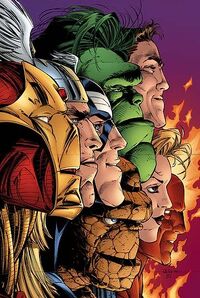 Following the apparent deaths of the Avengers and the Fantastic Four during the Onslaught crisis, the heroes suddenly re-appeared on Counter-Earth, reliving their lives in new, different ways, oblivious to their pasts.

They had been transported into a pocket universe by Franklin Richards, the near-omnipotent son of Mr. Fantastic and the Invisible Woman.

In this pocket dimension, propelled by subconscious memory, the heroes resume their heroic lifestyles and take up the role as champions of Counter-Earth, experiencing a number of different adventures.

Ultimately, Counter-Earth is a deemed a potential threat by the Celestials, who demand that Franklin Richards choose whether they shall destroy it or the original Earth. Eventually, a bargain is struck that both Earths shall be spared, but only if the heroes return to their original lives on Earth. Despite a last minute attempted betrayal by Doom, the efforts of Thor, the sundered Hulks and the Celestial Ashema allows for the bargain to be completed.

In the wake of the heroes' departure, Counter-Earth is suddenly plunged into chaos when the oceans surge and partially flood much of the world, resulting in the survivors warring over the remaining resources, as well as a new wave of super-empowering events. Into this chaos, Doom returns, and sets about seeking to restore order with the aid of a survivor named Samantha Dunbar, whilst native heroes start to rise up as well.

The cause behind the chaos is revealed as a rogue Celestial known as the Dreaming Celestial, or the Apostate. With Franklin's powers removed from actively protecting the Counter-Earth, the Apostate was granted free reign to begin interfering to its own desires. Locating the avatar of Ashema, Doom enacts a plan that ultimately brings the two diminished Celestials into battle, whilst at the same time he taps their unleashed energy to thrust Counter-Earth through the dimensional void, bringing it into the same dimension as the original Earth.

This only stymies the Dreaming Celestial for a brief period, before it attempts to consume Earth as well as Counter-Earth. Dr. Doom is forced to ally himself with the Fantastic Four in order to defeat it, but in the process is seemingly killed - instead, he is transported back to Counter-Earth, stripped of his armor and left in a hostile environment. Indefatigable, Doom fights his way back to his base in Counter-Earth's Baxter Building, destroying all foes in his way. He then turns dominion over Counter-Earth to Lancer and departs back to Earth.

With 2006 marking the "Heroes Reborn" event's 10th anniversary, Marvel is re-visiting it with a new event. First, the reality-traveling Exiles visited the "Heroes Reborn" Earth in Exiles #81-82. Next, a collected edition of the "Heroes Reborn" titles was released in Fall 2006. Finally, in November 2006, Jeph Loeb and Rob Liefeld reunited for Onslaught Reborn, a five-part weekly limited series that featured both Onslaught and a world similar to the "Heroes Reborn" universe. The latter tied in with the memorial scholarship fund established in honor of Loeb's son Sam.[2]

Heroes Reborn: The Return #4
Add a photo to this gallery

Retrieved from "https://marvel.fandom.com/wiki/Heroes_Reborn_(1996)?oldid=6612771"
Community content is available under CC-BY-SA unless otherwise noted.