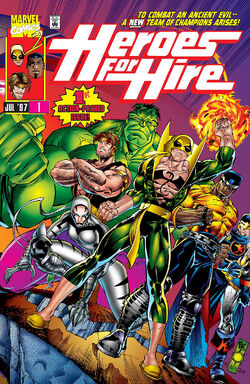 As a consequence of Onslaught's apparent massacre of several heroes, New York suffered a power vacuum after the Fantastic Four and Avengers were presumed killed. Following up on the status of the Oracle corporation that Namor, Jim Hammond (the Golden Age Human Torch) and Danny Rand decided to set up a new Heroes For Hire organization. Iron Fist recruited Luke Cage for this. The core team consisted of Fist, Cage, and an assortment of others: Black Knight (Dane Whitman), a new White Tiger, and Ant-Man (Scott Lang). Together they battled the U-Foes and the Master of the World.[2]

Namor sold Oracle Inc. to Stark-Fujikawa who wanted to fire Cage and Lang for being ex-cons and then also have complete control of what missions they take, the members of Heroes for Hire decided to quit instead.[3]

Retrieved from "https://marvel.fandom.com/wiki/Heroes_for_Hire_(Oracle_Inc.)_(Earth-616)?oldid=6126791"
Community content is available under CC-BY-SA unless otherwise noted.