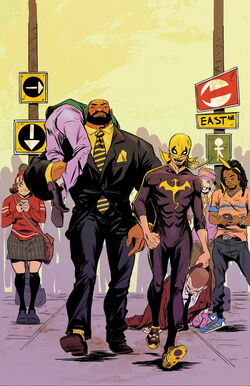 Heroes For Hire, Inc. is a small business licensed by the state of New York which offered a full line of professional investigation and protection services. Heroes For Hire was owned by Luke Cage and Daniel Rand. It had offices on Park Avenue and two paid employees, secretary Jennie Royce and lawyer/business representative, Jeryn Hogarth. Heroes For Hire would not accept jobs involving extralegal activities.[1]

They first met at a party held by Jeryn celebrating Luke Cage's exoneration of all charges they were attacked by Stiletto and Discus teaming up to take them down.[2] Cage's efforts led to a fight with Iron Fist, however, upon learning of Cage's situation, Danny later helped him defeat Nightshade.[3] Cleared of criminal charges, they briefly worked for Misty Knight's detective agency Nightwing Restorations but soon elected to become a two-man team, "Heroes for Hire". Although the streetwise Cage and the unworldly Iron Fist seemed to have little in common, they soon became the best of friends.[4]

Danny visited Joy Meachum and relinquished control of his share of Rand-Meachum Inc. to her until such a time that he believed he's earned the wealth from the company. Their first official mission as a team was against the Incinerator who tried to rob Manhattan National Bank. They took him down easily using the sprinkler system, then Cage just knocked him out.[1] They next attended a local car show to advertise the business, which Cage found boring until it was attacked by the Bull and his thugs. Their mission was to steal the Fantasti-Car which was on display at the show. The duo took out the thugs with little effort.[5]

The were hired by Ahmet Abdol and Professor Merridew to protect an exhibit of ancient Egyptian artifacts on display at the Metropolitan Museum. Senor Suerte tried to rob the museum and they initially stopped him but the artifacts they recovered were revealed to be fakes. Teaming up with Lt. Rafael Scarfe of the N.Y.P.D. they followed a lead and ended up at the apartment of Ahmet Abdol who was revealed to be the "Living Monolith".[6] The Monolith then began a rampage on the city and the pair teamed up with Misty, Colleen Wing and the X-Men to stop him. They learned that he was empowered by the Cheops Crystal, which was stealing life energy from people. They freed the imprisoned people and the Monolith returned to normal.[7]

The duo tried to take down El Aguila, a "hero for the underprivileged", who was taking on drug dealers and crime lords with a sword. J.P. Preston, the owner of the London Street Property Owners Association (who owned local slum housing), hired the team to stop El Aguila, who had been robbing his offices. They reluctantly accepted and when they confronted El Aguila, Preston tried to shoot him but Cage got in the way and he escaped. Preston screamed at them to stop him but they reminded him that they got paid a retainer regardless of success or failure and that since it was after 5:00 their shift was over and they left.[8]

The incident with J.P. Preston gave them bad press appearing in an article in the Daily Bugle. Danny was injured in an explosion and Alan Cavenaugh was the main suspect.[9] He was taken to the police under suspicion that he was the "Manhattan Bomber" because of Cavenaugh's past ties with the IRA. They were hired by the ambassador to Halwan, who offered them $1000 to determine who the bomber was. During the investigation they proved his innocence and Alan helped them find the bomb before it blew up the embassy.[10]

Big Ben Donovan came to them for help after being attacked by goons of the Maggia. However they were led by Man Mountain Marko who knocked Cage into some exposed electrical wire. Thunderbolt was also following Donavan as a suspect in a murder case and believed Iron Fist was just another thug but after a brief battle they realized their mistake. Cage and Donovan were taken to Caesar Cicero, who wanted to know the location of the stolen drugs. [11] They tracked down Cicero's penthouse, but Cage was taken to a graveyard to be buried alive. They found the grave and rescued their friend, but Donovan revealed that he kept the drugs for himself and ordered the hit on Thunderbolt's brother. Having found his brother's killer, Thunderbolt died happy, leaving them to turn in Donovan.[12]

They smashed up a number of Senor Suerte's gambling operations, who now wanted revenge for the death of his brother. This gained them a lot of popularity regarding their latest case. Suerte placed a bomb in the Gem Theater, destroying the building and injuring D.W. Griffith.[13] The heroes tracked down Senor Suerte and Senor Muerte and as they were arrested they swore to get revenge.[14]

The team was called to Canada where they visited Jeryn's private office. He brought them there as women on his staff may have been stealing the various assets that are kept at the Aerie. When El Aguila arrived to attack the Aerie, he ultimately ends up teaming up with the Heroes for Hire, and exposing a number of Jeryn's support staff who are responsible.[15]

When Misty and Colleen were injured in a fight against Sabretooth and the Constrictor, they asked the Heroes for Hire for help. They took down the criminals and rescued Misty whose bionic arm was trapped in a vault.[16]

Luke was kidnapped when they were breaking up a bank robbery. They later found out he was captured by his old foe Bushmaster. He wanted Dr. Noah Burstein to reverse the process that slowly rends him immobile. He did this by holding his wife hostage. Danny tracked him to his lab on a ship. Danny freed Luke, and before Bushmaster could push the button to signal to his men to kill Noah's wife, he became totally inert. As Bushmaster's body crumbled into a skeleton the others escaped.[17] After the incident Luke had lost his super-powers. But they still needed to rescue Emma Burstein, but in his weakened state Luke was left back at the office to recover. Dr. Arthur Nagan came after Luke for revenge after his defeat by him and the Defenders. Luke escaped to find his friends, but Nagan followed. During a fight Luke is knocked into the electric fence. However, instead of killing him the electricity restores his super-powers, allowing to take down Nagan with ease.[18]

They were hired by El Supremo, the leader of Terranueva, to stop a drug operation. But during the investigation they learn he is a dictator and running the drug operations himself. With the help of the locals they overthrew the despot leader. [19]

The Ninja stole the Amulets of Power worn by the Sons of the Tiger, beating Bob Diamond half to death in the process. Luke and Danny went to check on their friend in hospital whre the learn Master Khan had sent the Ninja to recover the Amulets. However when they find the antique shop he is hiding in he realeases a mystical Jade Tiger. He leapt on it's back as it took him through a portal.[20] They follow and found themselves in K'un-Lun. They help them against an attack from the plant like H'ylthri. Danny is attacked by Yu-Ti and taken to be sacrificed to Master Khan. Lei-Kung and Luke came to his rescue. Khan opened a portal back to Earth, but before they leave, Iron Fist destroys the crystal that works as a bridge between the two realms.[21]

Man Mountain Marko was sent to free Hammerhead from a prison transport protected by the Heroes for Hire. Marko along with the Eel are easily matched against the heroes. However Luke and Danny trade partners, pitting the Eel against Luke, and Man Mountain against Iron Fist, the Heroes for Hire manage to beat their foes. Hammerhead crashed into the prison wall and was arrested.[22]

Luke was attacked by Captain Hero, who wanted him as his "partner". Luke refused and Captain Hero eventually knocked Luke through a building which fell on top of him. Luke recovered but swore revenge. Dr. West approached them and explained Captain Hero was actually a small child who was exposed to alien radiation and gained great power. They took him down and he was sent to Project P.E.G.A.S.U.S. for treatment.[23]

Their partnership's downfall began when the mysterious government agency S.M.I.L.E. manipulated Cage and Iron Fist into the employment of Consolidated Conglomerates, Inc..[24] During their first CCI assignment, Iron Fist contracted radiation poisoning.[25] Cage took him to K'un-Lun for treatment.[26]

While there, Iron Fist was, unknown to Cage, replaced by a doppelgänger of the plantlike H'ylthri race, K'un-Lun's ancient enemies.[27] Luke did not suspect anything, putting "Danny"'s strange behavior down to recovering from his poisoning.[28] Soon after their return to the outside world, the doppelgänger was destroyed, pummelled by the alien Super-Skrull, as a result of a bizarre scheme engineered by Iron Fist's archenemy, Master Khan. Cage was blamed for the apparent murder of Iron Fist.[29]

Luke and the real Danny later reformed the original Heroes for Hire during Daredevil's takeover of Hell's Kitchen. They recruited Victor Alvarez the as the new Power Man.[30] Danny took Victor under his wing and helped the young hero with his training. The new duo helped Jennie Royce when she was accused of murder.[31] They later recruited Ava Ayala the new White Tiger. The Heroes for Hire teamed with Spider-Man to battle the Plunderer when he attempted to steal Horizon Labs technology. The team disbanded not long after as the members joined the Mighty Avengers.[32]

During the lull in usage, Deadpool took hold of the Heroes for Hire name after he became inspired by Solo's usage of his image. This angered Luke Cage into getting the name back, thanks to a cease and desist letter proclaiming rights usage.[33]

After helping Tombstone recover the Supersoul Stone from White Jennie,[34] Luke and Danny then reunited once again as the Heroes for Hire, opening a new headquarters in Harlem. They next accompanied Deadpool and Daredevil to Fresh Kills, New Jersey to recover a missing laptop.[35]

Retrieved from "https://marvel.fandom.com/wiki/Heroes_for_Hire_(Power_Man_%26_Iron_Fist)_(Earth-616)?oldid=5547688"
Community content is available under CC-BY-SA unless otherwise noted.