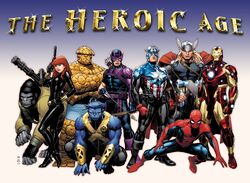 Others
Council of Skyfathers

Eternity knew something he wasn't telling.

When Hank Pym came face-to-face with the embodiment of the universe, Eternity named him as the Scientist Supreme of Earth, and told him of a coming Age of Heroes. Pym, who was at the time at odds with Norman Osborn's H.A.M.M.E.R. organization, didn't know what to make of this pronouncement, and was quickly distracted when his team needed his help fighting the Unknown, but the words had been said.

In the darkest hour of the Siege of Asgard, when Loki, the God of Mischief chose to turn on the Void, he used the Norn Stones to reinforce the power of Earth's Mightiest Heroes, granting them the power of his imagination that the Earth might be saved.

In the wake of the fight, the heroes realised what this meant. United as never before, they stand again, no longer divided by politics or paychecks, no longer skirting the border between themselves and the outlaws they face. With Steve Rogers taking the post so recently vacated by Norman Osborn, a new day has dawned.

Retrieved from "https://marvel.fandom.com/wiki/Heroic_Age_(Event)?oldid=5860477"
Community content is available under CC-BY-SA unless otherwise noted.