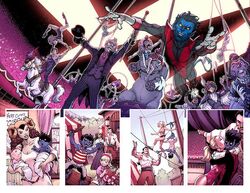 Herr Getmann's Traveling Menagerie (German: Herr Getmann's Reisende Menagerie) was a small German circus that traveled across Europe entertaining people across the continent. It was ran by Herr Max Getmann the famed Ringmaster.[1]

A small blue skinned baby was found by by Margali Szardos, a sorceress and gypsy queen, who was a fortuneteller at the circus. Margali took the baby back with her to the circus.[1] She named him Kurt Wagner was never legally adopted by anyone but was raised within the circus, mostly with people who had no prejudices against "freaks" save for the ringmaster, Herr Max Getmann.[1] Margali acted as Wagner's unofficial foster mother.[1] Wagner grew up in Max Getmann's Circus and his two closest friends were his "adopted" brother and sister, Margali's natural children Stephan and Jimaine Szardos. Later, Kurt and Stephan forged a true friendship as they grew older, and Stephan knew that his magical heritage might lure him to evil one day. So, Stephan had Kurt promise him a blood-oath, that if he ever killed without reason, Kurt would kill him as well. Long before his teleportation power emerged, Wagner had tremendous natural agility and by his adolescence he had become the circus's star acrobat and aerial artist. Circus audiences assumed that he was a normal-looking human being wearing a demon-like costume.[1]

As he got older, Kurt's abilities drew less and less of a crowd until one day, Herr Getmann could no longer afford to keep him sedated between acts and decided to sell him. Fearing the worst, Margali worked with Armen Freilich to free Kurt. As he fled, he accidentally knocked over a torch, igniting the circus. Getmann and his men chased Kurt through the forest and were about to shoot him in the face when he teleported for the first time. Astonished and pleased with his escape, Kurt wearily made his way to the nearby Father Wagner's church. Two days later, he was discovered and welcomed and Kurt happily found a home trading shelter for labor. One evening, Armen burst in the door, apparently being chased by Getmann and his goons for escaping. Father Wagner tried to stop them from taking the boys, but the men proved too strong and set the church on fire during the brawl. Kurt ported Armen to a nearby farm before going back and beating on Getmann. Just as he was about to kill Getmann, Father Wagner reminded Kurt of his humanity. With the tides turned, Getmann and his men took aim to kill both Kurt and the Father but were frozen. Professor Charles Xavier had arrived and taken control of the angry mob's minds, programming them all to remember Kurt dying in the fire.[1]

Many years later, the circus was destroyed by the Hive in an attempt to find the Soulsword.[3]

Retrieved from "https://marvel.fandom.com/wiki/Herr_Getmann%27s_Traveling_Menagerie_(Earth-616)?oldid=5547693"
Community content is available under CC-BY-SA unless otherwise noted.