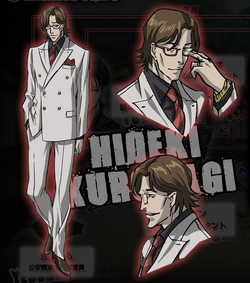 Hideki Kurohagi was a high ranking member within the Wolves and A.I.M..

At some point prior to his first appearance, he killed his father, Juō Kurohagi, with poison to seize control over Madripoor.[1]

To expand his criminal empire, Hideki arranged with Shingen Harada to marry Shingen's daughter, Mariko Yashida, in return for letting Shingen use Madripoor as a base of operations.[2] When Logan infiltrated the Harada house and was challenged to a fight by Shingen, Hideki interfered and shot Logan with a poison that even his healing factor couuld not overcome.[2] Logan thus ended up unconscious and lost the fight, but Shingen berated Hideki for interfering like that.[3]

The next night, Hideki expected a shipment of synthetic drugs, which he planned to offer to Shingen as a dowry. Thanks to his new ally Yukio, Logan learned of this and set fire to the ship when it arrived before confronting Hideki himself. He easily overpowered and unarmed Hideki. Hikeki only escaped due to the unexpected arrival of Omega Red.[4] After Logan and Yukio fled the scene following Logan's fight with Omega Red, Hideki send one of his men to follow them and try to kill them with a bomb, which failed when Logan realized the danger.[5]

The attack on Hideki's ship gave the Public Intelligence Security Agency the proof they needed that Shingen was a criminal, Shingen decided to leave Tokyo and went to Madripoor with Hideki and Mariko.[6] When Logan and Yukio followed him there, Hideki send Vadhaka to kill Logan.[7] While Vadhaka failed in his mission due to interference from Min, Yukio was trapped under some rubble in the fight, allowing Hideki's men to abduct her.[8] Hideki had three of his men use Yukio to set a trap for Logan at a junkyard, but this failed.[9]

When Logan, aided by Yukio and Koh's gang, reached the Dragon Palace, Hideki send Vadhaka for another round. Vadhaka was destroyed by the combined efforts of Logan and Kikyo.[10] Hideki tried to get the wedding ceremony finished, but Logan reached him and Mariko before the wedding was made official.[11]. As Shingen fought Logan in a last duel, Hideki took Mariko to the catacombs underneath the palace, and revealed he had the whole place rigged with bombs, which he detonated.[1] Despite the explosions, Logan, with Kikyo's help, reached the catacombs. As a last effort, Hideki shot Logan with a poisonous dart that was supposed to kill him despite his healing factor, but Logan managed to pull the dart from his body before getting the entire dose and used the remaining poison to kill Hideki. Unfortunately, in the struggle, Hideki's gun went off and the bullet fatally injured Mariko.[1]

Poison: Hideki has a toxin developped by A.I.M., that kills even someone with a healing factor

Like this? Let us know!
Retrieved from "https://marvel.fandom.com/wiki/Hideki_Kurohagi_(Earth-101001)?oldid=6290221"
Community content is available under CC-BY-SA unless otherwise noted.