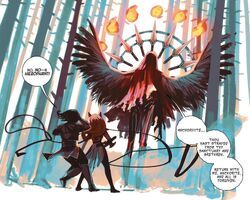 The Hierophants were one of the highest powers in Heven, the other being the Queen of Angels. They oversaw the Anchorites,[3] the rare and wingless male Angels[4] whose sole purpose was to create or steal an afterlife for their angelic mistresses.[5]

When All-Father Odin sundered Heven from Yggdrasil,[6] the Hierophants built a furnace that could peer into the worlds they could not touch anymore. They planned to use it to overthrow the Queen of Angels and conquer the other Nine Realms.[7] One day a Hierophant was followed to the furnace by an Anchorite named Sera. He caught her looking into it and tried to make her answer the transgression with her life, but Sera cast a spell that threw him to his death inside the engine.[3] After this incident, the furnace mysteriously vanished[7] and Sera escaped from the Temple of the Anchorites.[4]

A Hierophant later confronted Sera, demanding her to return to the Temple with him. When she refused to go, he offered to give her companion, Angela, information about her missing mother, Loriel, if she returned Sera to him. Angela didn't take his deal and proceeded to attack him, forcing the Hierophant to flee while vowing to take revenge on her for defying the Temple.[8]

Retrieved from "https://marvel.fandom.com/wiki/Hierophants_(Earth-616)?oldid=5514353"
Community content is available under CC-BY-SA unless otherwise noted.