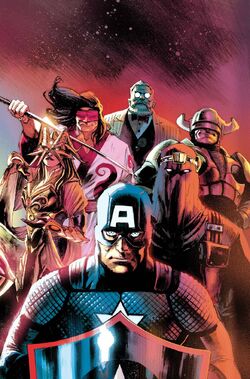 The High Council of Hydra was the group with the highest level of leadership within Hydra, being often made up of its highest-ranking leaders and assets.

After coming into conflict with Fury's Secret Warriors,[9] the Council decided it was time to destroy S.H.I.E.L.D. once and for all.[10] Upon learning Fury planned to attack the H.A.M.M.E.R. shipyards to regain his Helicarrier fleet, the male members of the Council split away to lead an assault against Fury while the female ones obtained a box[11] containing a Brood power source[12] from Clan Yashida.[13] With the High Council focused on warring with Fury, Leviathan agents kidnapped Viper,[14] who was killed by Madame Hydra[15] and later brought back to life by the Hive.[16]

Hydra and Leviathan went to war with one another, their conflict ending with Leviathan's destruction and the High Council of Hydra's disbandment: Viper and Gorgon decided to leave Strucker to cut their losses and took their Hydra troops with them,[17] the Hive was seemingly killed by the Caterpillars' Grey Team,[18] and Kraken's identity as Jake Fury was revealed. Jake was in fact a double agent working for his brother Nick, helping him finally kill Baron Strucker.[19] Afterwards, Gorgon and Viper went on to join Norman Osborn and his H.A.M.M.E.R. coalition.[20] Norman Osborn was ultimately defeated by the combined efforts of the Avengers and New Avengers, and H.A.M.M.E.R. was disbanded. Viper used the remaining agents to reconstruct Hydra as the new head of the organization.[21]

When Hydra discovered a young Inhuman boy (named Lucas) whose blood contained a toxin capable of sterilizing human beings, new Hydra leader Baron Zemo created a plan to use his blood as a bioweapon to sterilize the world, leaving only immunized Hydra operatives with the ability to reproduce. Batroc the Leaper, Taskmaster, Cobra, Sin, Armadillo, Viper, Baron Blood, and Crossbones joined Zemo's cause of their own free will, thus becoming his High Sect.[5]

When their original plan to spread Lucas' blood failed due to the combined efforts of Captain America (Sam Wilson), Nomad, and Misty Knight,[22] Baron Blood attempted to detonate himself in the high atmosphere while full of the boy's blood, but this contingency plan was too thwarted by Captain America. With most of its members defeated, the High Sect disbanded.[11]

After months of planning, Captain America led Hydra into taking over the United States of America while also eliminating any opposition from the superhero community.[23] The High Council ran the country from that point forward, but a few of its members questioned Captain America's methods and even tried to subvert his rule.[24][25] After the death of Madame Hydra,[26] Captain America started getting serious and ordered the High Council to retrieve the last few remnants of Kobik so he could restore his world. The High Council split up and launched simultaneous attacks on New Tian and Wakanda, managing to obtain the Cosmic Cube fragments kept there.[27][28] Things started to fall apart for Hydra when America's superhero community reunited and banded together to overthrow their rule. Much of the High Council took part in the final battle in Washington, D.C., but they were defeated and Hydra's rule over the United States was ended.[29]

All members of Zemo's High Sect made use of the Infinite Elevator to move throughout the world.

Like this? Let us know!
Retrieved from "https://marvel.fandom.com/wiki/High_Council_of_Hydra_(Earth-616)?oldid=5801809"
Community content is available under CC-BY-SA unless otherwise noted.