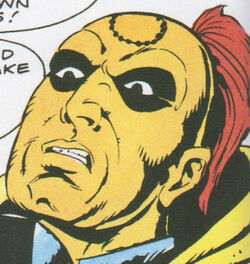 Starick used to work for the National Union of Retired Sports Experts. As other N.U.R.S.E. employees, he was corrupt. When his activities were deemed out of line, an order was given to terminate him.

Starick faked his death and disappeared, eventually resurfacing as a mysterious, always hooded High Father figure commanding approximately twenty ex-Game teams and controlling a portion of the South Coast of England around Channel City. Using these resources, he stole a lot of livestock turning the city into cattle farm and securing loyalty from the population.

In 8162, the World Development Council sent Dragon's Claws to free the city. During their successful assault, which was broadcast live, the hood fell from his face revealing his true identity. This information was so embarrassing for N.U.R.S.E. that Silas Stenson ordered to terminate the broadcast immediately.[1]

Like this? Let us know!
Retrieved from "https://marvel.fandom.com/wiki/High_Father_(Starick)_(Earth-5555)?oldid=4974838"
Community content is available under CC-BY-SA unless otherwise noted.