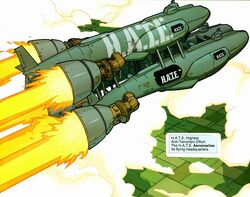 The Highest Anti-Terrorism Effort was formed by the Beyond Corporation to eliminate and destroy various terrorist organizations. They also brought about catastrophic devastation.[citation needed]

Retrieved from "https://marvel.fandom.com/wiki/Highest_Anti-Terrorism_Effort_(Earth-63163)?oldid=5604360"
Community content is available under CC-BY-SA unless otherwise noted.