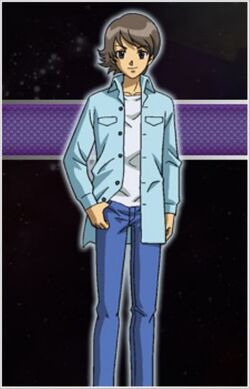 Hikaru is the oldest son of Dr. Nozomu Akatsuki. In contrast to his brother Akria, he is more calm, quiet, and mature. He has many talents, like being a good student, sportsman, and gamer. He has skipped several grades and is thus already in university.[1]. His one flaw however is that he tends to be overly concerned about Akira, and often forgets everything else around him if Akira is in trouble.[2]

Hikaru and his brother Akira were left in the care of their Aunt since their father had to go to America to work on his latest project: the DISK. Since Tony Stark wanted Akira and Hikaru to be proud of their father, he allowed both boys to attend the official presentation of the DISKs at the Raft. However, since Akira stopped on his way home to help a young boy find his mother, the two of them missed their flight to America. Fortunately, Tony Stark sends Pepper Potts with his private jet to pick the boys up.

During the demonstration, Loki and his henchmen, the Celebrity Five, crashed the party by releasing all super-villains from their cells and DISKs. While the Avengers tried to fight off the horde of villains, Dr. Akatsuki and his 2 sons found themselves cornered in the lab by Crimson Dynamo, who wanted the last Biocode Installer. Thanks to interference from Spider-Man, the villain was defeated, but Dr. Akatsuki was wounded in the process. Therefore, he gave Akira the suitcase with the installer and ordered both him and Hikaru to follow Spider-Man to the heliport. Along the way, the boys ran into 3 other kids: Chris, Jessica, and Ed.

When the group noticed King Cobra, who had taken Pepper Potts, hostage, Hikaru participated in Akira's plan to fee her. Akira approached King Cobra and offered to trade the installer for Pepper, but in doing so he lured King Cobra towards some containers, which the others then pushed on top of him. By then, Loki had already captured four of the Avengers, leaving only Iron Man to continue the fight until he too was captured. When M.O.D.O.K. tried to destroy the biocode installer, the installer instead gave Hikaru and the other four kids a Biocode. Not much later, a scuffle between Akira and Loki created a shockwave that scattered all DISKs containing the heroes and villains across the globe, robbing Loki of his army.

In the aftermath, Akira and Hikaru were both taken into S.H.I.E.L.D. custody and learned that their biocodes were incomplete. As a result, they could only temporarily release the trapped heroes from the DISKs. They also learned that their father had gone missing. When Loki, in his guise of Senator Robert, put S.H.I.E.L.D. out of action, Akira and Hikaru teamed up with Pepper Potts and Hawkeye to find the other DISKs before Loki could do so. Hikaru was a little more reluctant than Akira to leap into action but was convinced to do the right thing by Hawkeye. Hikaru then received Thor's disk from Spider-Man, and became the partner of the Asgardian god. Together, they recruited Chris as their ally and stopped the Hulk when the latter was mind-controlled by Diablo into attacking an Air Force Base. With 4 of the five Avengers back on their side, they attacked the ship of the Celebrity Five to free Jessica and Ed, and secure Wasp's DISK, thus completing their team.

While on a mission to an abandoned research facility to secure a lost DISK, a plot by Loki to lure Thor away from the others made Hikaru realize how carried away he tends to get if Akira is concerned. He managed to make Thor see reason and promised Akira to be more mindful from now on.[2]

When Tony Stark enrolled Hikaru and his friends in Techno Isle international school, Hikaru began a relationship with a girl named Noriko Ashida, only to discover that she was a mutant. He tried to help her come to terms with this, and coerce her into using her powers to free the Avengers from their DISKs. Although this last plan failed, he did succeed in making Noriko accept who she was. The two of them had to say goodbye when she went to America with the other X-Men.

During the battle with Loki in the latters Ice Palace, Hikaru managed to synchronize his biocode with his partner, thus giving Thor the ability to draw power from him and extend his time limit.

When Red Skull started his plan to destroy the world and the Avengers had to split up to take out his 5 bases of operation, Hikaru and Thor were tasked with taking out the base guarded by Graviton. Just like their fellow Avengers, they succeeded in their mission and thus thwarted Red Skull's plan. However, Red Skull still had a trick up his sleeve; immediately after the battle, he confronted Hikaru and stated his alternative plan to plunge the world into despair, starting by targeting Akira. Just like Red Skull planned, Hikaru's desire to protect his little brother caused him to panic, and in desperation the teen absorbed a shard of the Dimension Sphere from the recently destroyed Gaia Anchor into his body, hoping it would help him defend Akira.

Instead, the Sphere's dark energy made Hikaru a servant of Red Skull, who then used them to lure the other Avengers to his lair and force Thor to fight his fellow Avengers. The battle was interrupted when Hawkeye, who turned out to be still alive, attacked Red Skull. Angered, Hikaru charged the Sphere’s dark energies inside him into an energy blast, which he fired at Hawkeye. Thor however took the blast and was able to resist it long enough for Hikaru to burn up all the energy, which restores him back to his normal self (though Iron Man later theorized that the self-repair system of Hikaru’s biocode probably had a hand in it as well). Once freed from the Sphere's control, Hikaru helped to defeat Red Skull.

When the young hero Nova tried to join the Avengers but was D-secured into a DISK by Rosetta Riley, Hikaru accepted him as his second hero.

While visiting a museum at night, Hikaru became a victim of the vampire Baron Blood and was seemingly turned into a vampire himself. He thus became loyal to Blood and attacked Akira and Iron Man. Iron Man discovered however that Hikaru's biocode, which had for some time been evolving now, had prevented him from turning into a vampire, and that Hikaru was instead only believing himself to be a vampire.[3] When Blood sends Jessica, Chris, Edward, and Hikaru to attack the Avengers base, Blade and Iron Man came up with a plan to save them. By having their Avenger partners use the synchronization between them to power up the biocodes, the biocodes were able to expel Baron Blood's influence.[4]

After Akira was tricked by a new villain, Ronin, to release him from the Dark Dimension, the kids and Avengers soon found himself fighting Ronin to prevent the villain from stealing the Treasures of Darkness, with which the Celebrity Five intended to release Loki and even more powerful evil, Dormammu, from the Dark Dimension. When Iron Man discovered that Ronin was actually Akira's and Hikaru's father, Nozomu Akatsuki, he tried to hide this knowledge from the 2 boys, but the found out eventually when in a fight at the Great Pyramid Ronin's mask was destroyed.[5]. Hikaru was naturally pissed off at Iron Man for keeping this information a secret, though not to the same extent as Akira. However, a greater problem required their attention first; during his first battle with Ronin, Iron Man had been infected by some of the energy from the Dimension Sphere, which eventually resulted in him falling into a coma, his conscious mind getting sent into the Dark Dimension. Hikaru helped his team track down the DISK of Dr. Strange, and made him his third hero. Strange was then able to save Tony from the Dark Dimension.[6]

When the Avengers discovered the plan to release Dormammu from the Dark Dimension with the help of a device called the Dark Gate, they came to the location of the machine to try and stop him. Although the heroes failed to prevent the gate from being opened and at least Loki to escape the Dark Dimension, Akira and Hikaru did manage to free their father from Dormammu's influence, restoring him back to his normal persona of Nozomu Akatsuki.[7] Now free, Nozomu build a new Biocode installer and gave Nick Fury a complete biocode. Fury used this new power to permanently release all captured heroes from their DISks. This however meant that Hikaru and the others were no longer needed to help the Avengers. Moreover, because their limited biocodes had been evolving beyond Nozomu Akatsuki's understanding, he considered it wiser to remove the codes. Hikaru eventually agreed to this.[8] The process also caused Hikaru to forget everything that had happened so far, at least until he saw a news cast about the Avengers being arrested by S.H.I.E.L.D. in order to be delivered to Dormammu. With his memories restored, Hikaru made his way to the Avengers base to help out Thor.[8]

With great difficulty, Iron Man managed to convince Nick Fury to let Hikaru and the other kids stay onboard the Helicarrier for the final offensive against Dormammu, stating that their presence was still a boost to the Avengers' morale.[9] As such, Hikaru was present when the Avengers and S.H.I.E.L.D. set out to destroy Dormammu and the gate to the Dark Dimension with the 10 laser cannons that his father had helped to build. When Loki, in an attempt to keep S.H.I.E.L.D. from defeating Dormammu, infiltrated the helicarrier and spread a rumor that the cannons were unsafe and would destroy the Helicarrier as well, Hikaru was the first to realize what was going on. Along with the others, he lured Loki out and exposed his scheme to the entire crew of the Helicarrier, restoring everybody's hope. With that taken care of, the Avengers and S.H.I.E.L.D. confronted Dormammu and defeated him.[9]

However, Loki seized this opportunity to D-secure Dormammu and steal his powers for himself. As the Avengers tried to fight him off, Hikaru used what remained of his biocode to give Thor his Build Up Armor for the final time. Unfortunately, even this wasn't enough to defeat Loki. The Avengers fell until only Iron Man was left to continue the fight.[10] Iron Man was able to get Loki away from the Helicarrier and the other Avengers and continued the fight on Techno Isle. When his father suggested using the Kree Mact to give Iron Man a chance against Loki, Hikaru and the others stole the Kree Mact and personally brought it to Techno Isle. Akira, being Iron Man's partner, got to deliver it to Iron Man. Before he went, Hikaru admitted Akira had grown strong and didn't need his protection anymore.[10]

Powered by the Kree Mact, Iron Man was able to defeat Loki. Hikaru was present when the Avengers and S.H.I.E.L.D. confronted the defeated god, and helped D-Secure Loki's army of Mindless Ones. With Loki defeated, Hikaru said goodbye to Thor. 3 months later, Hikaru was back to his studies and had started working for S.H.I.E.L.D. as a lab assistant of his father.[10]

Purple Biocode: Hikaru's DNA has been infused with the Purple Biocode, allowing him to use the Energy variant of DISKs and to secure others using DISKs.

While possessed by the Dimension Sphere, Hikaru gained the ability to float in the air and unleash an energy wave.[11]

Like this? Let us know!
Retrieved from "https://marvel.fandom.com/wiki/Hikaru_Akatsuki_(Earth-14042)?oldid=5749633"
Community content is available under CC-BY-SA unless otherwise noted.