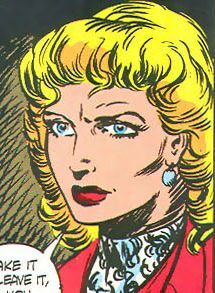 Hilda Zemo is the wife of Baron Heinrich Zemo and mother of their only child, Baron Helmut Zemo. Hilda's history is a bit contradictory. According to one report, Helmut Zemo claimed his mother died of a broken heart in the last days of World War II. At this time, she is shown with dark hair.[1]

On another occasion, it was shown that Helmut was raised to believe his mother was dead, but in fact, Hilda faked her death to escape from Heinrich. Hilda dies for real a short time later in an accident rigged by Heinrich.[2]

Like this? Let us know!
Retrieved from "https://marvel.fandom.com/wiki/Hilda_Zemo_(Earth-616)?oldid=6305237"
Community content is available under CC-BY-SA unless otherwise noted.