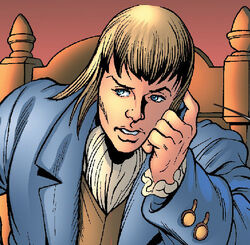 Hilliard Zemo is the eighth Baron in the Zemo Barony. As a young man, Hilliard was in love with a jewish girl named Elsbeth Kleinenshvitz. Elsbeth's family had been merchants who served the Barony since its inception. When Hilliard's father, Hartwig, died the Barony passed to him. Hilliard's advisors feared the Kleinenshvitz family was growing too wealthy and too powerful and were a threat to the Barony. Hilliard urged Elsbeth to flee the country, but she refused. Hilliard's men slaughtered the Kleinenshvitz family save for a pregnant Elsbeth who was saved by a time traveling Helmut Zemo.

Hilliard never knew that Elsbeth survived and had his child. Their unnamed child was the ancestor of a woman named Miss Klein who was killed by Wendell Volker in the present. Hilliard later married an Austrian girl named Gretchen and fathered Hoffman.[2]

Like this? Let us know!
Retrieved from "https://marvel.fandom.com/wiki/Hilliard_Zemo_(Earth-616)?oldid=4417647"
Community content is available under CC-BY-SA unless otherwise noted.