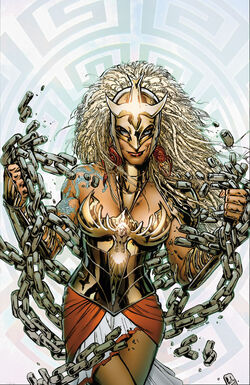 Hippolyta was the daughter of Ares, God of War, and Otrera, first queen of the Amazons, a tribe of warrior women who founded the city of Themiscyra on the Thermodon River in Anatolia.[4]

After many years of ruling the Amazons, Hippolyta eventually met Hercules when he, Jason, and the Argonauts landed near her city stronghold of Themiscyra. There they attempted to steal Hippolyta's enchanted girdle and any slaves they could along the way. Initially resenting Hercules for the initial invasion, Hippolyta eventually fell in love with him. Over the centuries, she made various attempts to win his affection, but ultimately he never gave her his heart. Thus a love/hate relationship was formed between the two.[6]

During her life she was the wielder of the Amulet of Pazuzu.[7]

At the time of the Trojan War, Hippolyta was accidentally killed by her sister Penthesileia during a hunt. Afterwards, Penthesileia grew in fear of the reproaches of her own, she became haunted by the Furies, came to Troy to cleanse her soul, and died on the battlefield.[2]

In her first modern-day appearance, Hippolyta helped Pluto, Greek god of the dead, in his plan to avenge himself on Hercules, by posing as a movie actress and tricking the hero into signing a "movie contract" that in reality bound him to Pluto's realm, Hades. But Thor came to his aid, and the heroes caused so much damage to Hades that Pluto himself broke the contract just to be rid of them.[8]

Pluto then involved her in a plot to convince Zeus that she should be married to Hercules and Venus to Ares. In reality, this would remove these two as obstacles while invading Olympus. This plot led to the formation of the Champions of Los Angeles.[9]

Hippolyta also formed a new generation of Amazons from female runaways in New York City called the Bacchae. The group clashed with such heroes as the Fantastic Four and the X-Men.[10]

After visiting her father Ares in an attempt to rally him to one of Hera's new schemes, which he ruffed, she was murdered by her daughter Artume, who was tired of her mother's obsession with Hercules.[11]

Hela later brought Hippolyta (codenamed "Warrior Woman", though she hated it) from the Underworld to help the Valkyrior defeat the Doom Maidens.[3] Hippolyta then joined the Fearless Defenders as a full-time member.[12]

Hippolyta possesses the conventional attributes of an Olympian goddess. However, many of her physical attributes are more developed than most other Olympian females.


Superhuman Strength: Like all Olympians, Hippolyta is superhumanly strong. Her strength is much greater than the vast majority of Olympian females, or even Olympian males. Hippolyta used to be of class 50 strength, whereas the typical Olympian male is of class 30. However, her strength was recently vastly enhanced when resurrected by various death gods, and it now considerably exceeds her father, Ares, who is a class 70. Likely placing her close to the class 100 level.

Superhuman Speed: Hippolyta can run and move at speeds beyond the natural physical limits of the finest human athlete.


Invulnerability: Hippolyta has superhuman durability. She is bulletproof and weapons such as swords can't harm her. However, fire seemed to be able to agonize/damage hippolyta.


Immortality: Like all Olympians, Hippolyta is functionally immortal. She is immune to the effects of aging and hasn't aged since reaching adulthood. She is also immune to all known Earthly diseases and infections. However, this doesn't mean that she can't be killed as no member of any of Earth's pantheons of gods is truly immortal. To be truly immortal, Death itself has to banish an individual from entering it's realm. The Elders of the Universe for instance are among the only truly immortal beings in the universe as Death prevents them from dying. While they can still be injured and feel pain, they will fully recover from any injury no matter the severity, though it may take time to do so.


Regenerative Healing Factor: Despite her superhuman durability, Hippolyta can sustain physical injury. However, her Olympian life force enables her to regenerate damaged tissue much faster and more extensively than a human being. In fact, her healing powers are superior to those of most other Olympians. However, she can't regenerate missing limbs, organs, or brain cells, at least not without the aid of powerful magical assistance.


Superhuman Agility: Hippolyta's agility, balance, and bodily coordination are all enhanced to levels that are beyond the natural physical limits of even the finest human athlete.


Superhuman Reflexes: Hippolyta's reflexes are similarly enhanced and are supperior to those of the finest human athlete.

Hippolyta is a formidable combatant and has been highly trained in hand to hand combat and all forms of Olympian weaponry by her father.

Like this? Let us know!
Retrieved from "https://marvel.fandom.com/wiki/Hippolyta_(Earth-616)?oldid=6134152"
Community content is available under CC-BY-SA unless otherwise noted.