History of the Marvel Universe Vol 2 1

History of the Marvel Universe Vol 2 #1

It is the end of the universe, All that is left is Franklin Richards and Galactus at the end of time. Franklin notes that final entropy isn't yet complete and there are still a few living particles. Galactus notes that something is troubling Franklin, revealing that his energy will be used to create the next universe. Franklin admits to not wanting to forget his original universe in the next universe, as it meant something important to him. He asks Galactus to help him remember everything, which galactus agrees to do.

Everything you ever wanted to know about the Marvel Universe — in one lavishly illustrated series! From the Big Bang to the twilight of existence, HISTORY OF THE MARVEL UNIVERSE chronicles completely, for the first time, everything that was, is or will be!

Lushly illustrated text tells the complete story of the Marvel Universe, revealing previously unknown secrets and serving as the ultimate reference book for Marvel fans! Witness the greatest tale ever told — and be prepared for some shocking revelations! 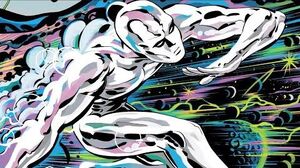