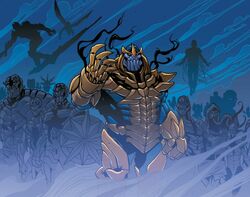 We thought Strange has been summoning us to stop the Poisons from eradicating Venoms... but the truth is worse then we thought - worse then even Strange knew, I bet. You think this is the war? It's not. It's just part of something much, much bigger. The Poisons figured out they were the perfect hosts for Symbiotes. But they don't want a symbiotic relationship. Like any other predator, they want to be the top of the food chain. They're not like us. For them, taking a symbiote is no different than putting on a badass suit of armor. But once Strange started summoning more, one after the other, all with unique abilities the Poisons had never seen before, there was no going back. They stopped caring about Cap's little resistance long ago. You're all tasty treats, but Strange was the real prize. Sure they're coming for the rest of you -- hard -- but that won't be nearly enough. They're so close to eradicating you and turning Strange that they're starting to frenzy like sharks in chummed waters. Eventually, Strange will break, and they'll use him to summon as many souped-up symbiotes as possible. Sooner or later, they'll have all the symbiotes they could ever need. When that happens, do you think they're just gonna relax? NoOoOoO. They'll start branching out, and then they'll use the symbiotes as weapons against anyone who gets in their way. And you'll all be too dead to stop them.

The Hive was the name used by the Poisons, a group of interdimensional creatures who can assimilate Klyntar and consume their hosts to gain their likeness, memories, powers, and abilities.[2] The Hive's Poisons were controlled by the Poison Queen, who was empowered by the life-force of those consumed and could speak and act through them. However, the Poison Queen's control was not absolute as several individuals resisted being consumed and/or rebelled against the Hive - namely Poison Deadpool, Poison Marvel Girl, and Poison Carnage.[3][4]

War against the Venoms

The Hive was first encountered when Doctor Strange stumbled upon a symbiote on the run from the Poisons.[5] In an attempt to stop the Hive's Multiversal quest for dominion, Strange summoned other Venomized heroes, villains, and antiheroes to form a Resistance. Unfortunately, many members of the Resistance were assimilated into the Hive.[6]

Strange eventually summoned the Venom of the Prime Marvel Universe to aid the Resistance, losing both Venomized Spider-Man and Captain Venom to the Hive.[5]

Meanwhile, the Hive also explored other avenues to conquer the Multiverse. One such attack was carried out by Poison Fin Fang Foom, who managed to access the mind of the Kid Kaiju from the Prime Marvel Universe, forcing the boy to summon him to that Earth's Savage Land.[7] Kid Kaiju's monsters were summoned to defeat this Poison, but were unable to do so because Kid Kaiju doubted himself, thus weakening their abilities.[8] This prompted Kid Kaiju to summon the Fin Fang Foom of the Prime Marvel Universe to defeat the 'impostor' and, while Foom was initially defeated in combat, he managed to give Kid Kaiju enough self confidence that his monsters could regroup and kill the Poison.[9]

Back in the Venomverse, Venompool willingly joined the Hive, believing that his strong personality and healing factor would allow him to survive the assimilation.[10] This infiltration succeeded and the Resistance gained a mole in the form of Poison Deadpool. Poison Deadpool "captured" Carnage, enabling the remaining members of the Resistance to mount a rescue in which they saved Strange and killed most of the Poisons based in Earth-22249.[2]

The Poisons Strike Back

After the failed attempt to use Kid Kaiju, the Hive fullfilled succeeded in their objective of travelling to Earth-616. Once in this univese, the Hive used the services of Symbiote-hunter Haze Mancer to raid Klyntar, the homeworld of the Symbiotes, and abducted all of its inhabitants.[11] In the process, the Poisons stumbled upon the X-Men and Venom, who were in a space adventure, and assimilated Jean Grey.[12]

The Symbiotes kidnapped from Klyntar were genetically modified so it would be harder to separate them from their hosts. The Hive then traveled to Earth, and started forcing the Symbiotes they abducted to bond with numerous superhumans, so they could be consumed in turn. The Hive additionally deployed agents to capture this world's Carnage, since they expected him to be a threat.[13] Since Kasady had been stripped of his Symbiote, the Hive was able to trick him into bonding with another and then assimilating him.[14]

Jean Grey's psyche had survived the assimilation due to her powers,[4] and she called out for Cyclops, allowing the heroes to learn the location of the Hive's mothership. Only Venom, the X-Men, Spider-Man and Daredevil made it to the mothership, since a Quinjet transporting other heroes was taken down from the sky by the Poison Thanos.[15] When they encountered the Poison Queen, who was using Poison Marvel Girl's powers to bolster her own, Jean Grey killed Poison Marvel Girl from within before killing the Poison Queen and reconstituting her body. Since all members of the Hive were connected to the Poison Queen, her death caused a chain reaction that destroyed almost every single Poison, assimilated or unbound. The only known Poisons to have survived were one that had assimilated Jimmy Hudson and Poison Carnage, though the latter had mostly retained his original psyche.[4]

Retrieved from "https://marvel.fandom.com/wiki/Hive_(Poisons)_(Earth-17952)?oldid=5662942"
Community content is available under CC-BY-SA unless otherwise noted.