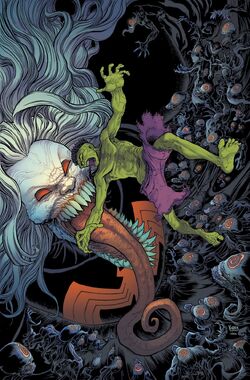 To facilitate his deicidal crusade, the dark god Knull created a species of amorphous symbiotic predators from the "living abyss", using them to conquer planets and consume entire civilizations.[2] Establishing himself as the nexus of his creations' hivemind, Knull created a throneworld out of living abyss and began establishing an empire of darkness and death across the nascent cosmos.[8]

At one point thousands of years in the past, the Symbiote Hive attempted to conquer the Microverse in order to assimilate the Enigma Force, hoping to become able to infest entire planets. The symbiotes' touch proved caustic to the minuscule dimension and its inhabitants, and nearly wound up destroying it and all existence; but they were repelled by the Enigma Force's avatar.[9][10]

Knull's control over the symbiotes was severed in a battle between one of his symbiote-dragons and Thor. Being disconnected from Knull caused the symbiote dragons to unravel into countless individual symbiotes, which sought out hosts to stabilize themselves. The symbiotes who had bonded to noble and kind-hearted hosts poisoned the Hive-Mind with the Light, leading to the symbiotes rebelling against Knull and imprisoning him at the core of the symbiote throneworld -- renaming it and themselves "Klyntar" after the symbiote word for prison.[2]

Ashamed of their dark past, the symbiotes of Klyntar desired to spread and maintain peace throughout the Cosmos by seeking out worthy hosts from various species in order to create an organization of noble warriors, the Agents of the Cosmos.[6] However, many of the symbiotes — including the one who would later become Venom — were bonded to unworthy hosts, "corrupting" them with hatred, rage, and ravenous predatory hunger.[11] These "corrupted" symbiotes were cast out of the Klyntar hive-mind,[6] which took to forcibly cleansing those it captured and executing those who resisted or relapsed.[12]

Despite being cut off from the hive-mind, the corrupted symbiotes formed into a loosely-organized spacefaring empire and resumed conquering planets, spreading what the Klyntar hive-mind claimed was misinformation about their species.[6][13] While some of the corrupted symbiotes took to overwhelming their hosts with bloodlust and corrupting them;[13][14][15] the vast majority came to see their hosts as nothing more than chattel and developed the practice of seizing control of their bodies; parasitically draining their vitality, phenethylamine, adrenaline, and other body fluids until they expired; and devouring their flesh before seeking out new hosts to repeat the process.[16][17] As a result, the corrupted symbiotes caused their species as a whole to become once-again feared as one of the galaxy's apex predators, their hosts treated with fear and mistrust.[18]

At some point in the past, Joot, one of the worlds conquered by the Symbiote Hive, was devoured by Galactus, amplifying the symbiotes' instinctual fear and hatred towards the cosmic entity and his herald, the Silver Surfer.[19]

The arms dealer Haze Mancer was an unwitting ally of the Hive, abducting uncorrupted symbiotes from Klyntar, weaponizing them with chemicals that corrupted them by amplifying their aggression and bloodlust, and selling them to space-pirates and warlords.[20][21]

The symbiote that would become known as "Venom" was once a member of the Hive, having been a member of the Agents of the Cosmos before being corrupted by its original host.[13] However, it was deemed aberrant for its desire to protect its hosts, and was imprisoned to prevent it from contaminating the Hive with like-minded spawn.[16] The Venom symbiote was later unwittingly freed by Spider-Man, who brought it to Earth where it eventually reproduced - having come to consider humanity its Hive.[22] Despite the Venom symbiote's increasing corruption and malevolence, neither it nor its nihilistic and bloodthirsty spawn made any deliberate attempt to contact or rejoin the Symbiote Hive.

The Symbiote Hive once attempted to conquer Earth, having been unintentionally summoned by the Venom symbiote, before being routed by Spider-Man, his clone the Scarlet Spider, Venom, and Carnage. Almost all of the invading symbiotes committed suicide after Venom unleashed a scream of despair,[23] and most of the surviving invaders were eaten by a Xenophage;[24] though one tried to get revenge on the "race traitor" Venom and was killed when its host, Rune, managed to break free of its control and devour it.[25]

At some point, a symbiote called Zzzxx attacked the Shi'ar Empire, but was captured and turned into a living weapon.[26] Members of the Hive tricked a swarm of Brood into becoming their hosts and attacked the S.W.O.R.D. space station in an attempt to lay claim to the unborn child of Deathbird while plotting to use his power to facilitate their conquest of the galaxy, but were repelled by members of the X-Men and Spider-Man.[17]

After Carnage's resurrection as a result of being bonded to a piece of the Grendel symbiote, he began hunting down previous symbiote hosts in order to extract their codices - the remnants of symbiotes in a host's body - and free Knull.[27] He succeeded in his mission, making Venom kill him and forcibly making the Venom symbiote assimilate the Grendel symbiote and the codices, freeing Knull. Upon awakening, Knull destroyed Klyntar and merged its constituent symbiotes into a fleet of Symbiote Dragons, resuming his conquest to destroy the cosmos.[28]

While some symbiotes utilized technological weaponry appropriated from conquered species,[29] most relied upon their fangs, claws, pseudopods, and whatever natural weaponry their hosts possess.

The Symbiote Hive possesses an array of technology obtained from conquered species, which they can use to construct warp gates to facilitate interstellar travel.[16]

Like this? Let us know!
Retrieved from "https://marvel.fandom.com/wiki/Hive_(Symbiotes)_(Earth-616)?oldid=6463139"
Community content is available under CC-BY-SA unless otherwise noted.