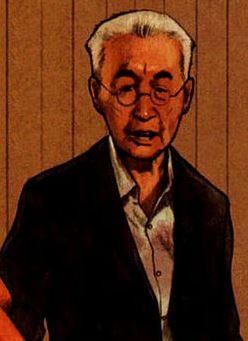 Professor Ho Yinsen was the hero here. He distracted the guards to save me. You get it? He died saving me! A--A better man than I ever thought of being! My whole life!

Professor Ho Yinsen was brilliant physicist and engineer from Timbetpal.[2] In the late '80s, he moved to Seattle, in the United States of America. He met a Chinese woman whom he married. They had a child named Toni. Unfortunately, the marriage fell apart, prompting Yinsen to return to Timbetpal. He kept in touch with Toni, regularly making sure she and her mother were okay.[3]

Back in his homeland, he married again, and had a son. However, his happy life was cut short when Red Room operative Natalia Romanoff kidnapped him in the name of warlord Wong-Chu.[4]

Ho Yinsen became a prisoner of the terrorist leader Wong-Chu in Siancong.[note 1] During this time, American inventor Tony Stark was sent to said country to supervise a field test of one of his new weapons. While travelling through the warzone, Stark tripped a booby trap. The resulting explosion lodged a piece of shrapnel in his chest. The gravely injured Stark was taken captive by Wong-Chu as well, and informed that the shrapnel would penetrate his heart within a week, killing him. Wong-Chu offered Stark at deal: if he would build a power weapon for the terrorists, he would allow his surgeons to save Stark's life. Stark agreed, hoping to gain time and access to tools.

Stark was given access to a small laboratory in terrorist territory along with fellow captive, Professor Ho Yinsen. Yinsen helped Stark design and build an electrically powered suit of iron armor and equipped it with a variety of offensive weaponry. The armor also contained pacemaker-like device which would enable Stark's injured heart to keep beating after the shrapnel entered it. Donning the suit, Stark connected it to an electrical generator to charge. Lying on a table Stark was helpless until the suit was fully charged. His captor, Wong-Chu, sensed something was amiss and came to investigate with armed men. Realizing he was sacrificing his life, Professor Yinsen went out to confront Wong-Chu, giving Stark the extra time he needed to fully charge the armored suit. As Iron Man, Stark avenged Yinsen's death and scattered Wong Chu's guerilla troops.[5]

It was found out later that Professor Yinsen had not immediately died from the gunshot wounds. He was teaching his knowledge to a fellow prisoner in the camp, a young man named Sun-Tao. After Wong-Chu ordered his men to fire on Professor Yinsen, he amusedly made Sun-Tao bury his body in the jungle. Sun-Tao was surprised to see that the professor still drew some breath. In his dying moment he passed on a notebook to the young man. Immediately afterwards, "The Great Salvager" appeared and wordlessly told Sun-Tao that he was collecting on an old transaction he had made.[6]

Years later, Iron Man traveled to a mobile station named New Timbetpal inhabited by a group of monks led by Sun-Tao who believed that Professor Yinsen was their great teacher. Iron Man, along with a band of the monks swarmed a village inhabited by the evil tyrant, Wong-Chu, who had become one of the biggest drug lords on Earth. They were captured and told that Professor Yinsen was still alive. After the battle, they returned to New Timbetpal where Tony Stark was told he may see Professor Yinsen. It is then he found that "The Great Salvager" had only saved the part of him that he felt mattered: his living brain.[6]

Ho Yinsen possessed the normal human strength of a man his age, height, and build who engaged in minimal regular exercise.

Cite error: <ref> tags exist for a group named "note", but no corresponding <references group="note"/> tag was found, or a closing </ref> is missing

Retrieved from "https://marvel.fandom.com/wiki/Ho_Yinsen_(Earth-616)?oldid=5609384"
Community content is available under CC-BY-SA unless otherwise noted.