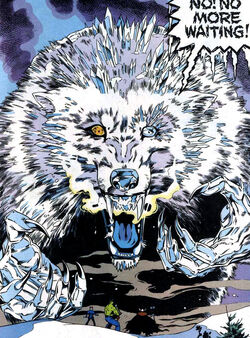 Gods, demigods, or mortals... You'll all taste the same to me.

Hoarfen was the child of the Fenris Wolf and an unnamed Frost Giantess who was the sister of Siingard. Hoarfen's existence was planned to be a secret but word of it leaked out. He was given the task of guarding the castle of Siingarud.[2]

Many years later, the Warriors Three, Hulk, and his wife Betty, along with Roger Norvell and some of the Pantheon were pursuing Agamemnon to Siingard Castles. The Frost Giant Siingard unleashed Hoarfen to protect Agamemnon. Siingard's first order to Hoarfen was to kill the Hulk.[2]

Leading up to this, Hector eventually caught Agamemnon, and while doing so, Hoarfen was released. Hoarfen thundered towards the band of heroes, making Hector Drop Agamemnon into the Hulk's arms. Hoarfens then grabbed the Hulk and Agamemnon in his mouth, killing them both before assaulting everyone else. The heroes were unable to defend themselves as no weapon could harm Hoarfen.[2]

Hela later brought the Hulk and Agamemnon back to life and appeared in Hoarfen's mouth. Hulk escaped by opening Hoarfen's mouth wide, fracturing his mandibles and forcing him to retreat.[3]

After being out of radar for a long time, Hoarfen reappeared and attacked the Avengers, but was taken out.[4]

Like this? Let us know!
Retrieved from "https://marvel.fandom.com/wiki/Hoarfen_(Earth-616)?oldid=4899309"
Community content is available under CC-BY-SA unless otherwise noted.