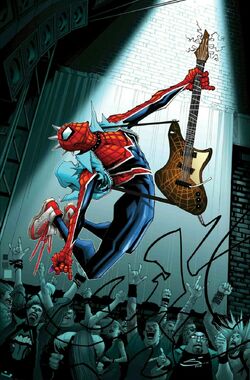 We don't have the power of the state. We don't have the authority on our side, the cops, or the media. What we have are angry hearts. Clenched fists. Love and rage... and 15,000 watts of punkrock, from an army of amps set to 11.

Foul-mouthed teenager Hobie Brown became a Spider-Totem after being bitten by a spider irradiated by illegal waste dumping. He proclaimed himself a Spider-Man and began to fight for freedom alongside his new friends Captain Anarchy (Karl Morgenthau) and Hulk (Robbie Banner).[4]

Leader of the Spider Army hat fought against President Osborn's regime, Hobart Brown utilized his free spirit as a "radioactive suicide machine" to rally support from the lowest classes that the regime was aiming to stamp out in the name of America's "strength". When Osborn led his forces, the Thunderbolt Department in the use of the V.E.N.O.M., Spider-Man used 15000 volts of punk rock out of an "army of amps" to disable the new technologies, then defeated Osborn himself by bashing him over the head with his guitar before Brown unmasked himself to the viewing crowd.[2]

Spider-Man joined the Superior Spider-Army when the Great Hunt started, chosen by the Superior Spider-Man for being "angry, unpredictable, [and] rabble-rousing".[2][3] Following the defeat of the Inheritors, Hobart returned to his reality after telling Spider-UK to keep careful watch of the former Inheritor Karn by reminding that he had killed countless Spider-Men despite having helped the Spider-Army against his brethren.[5]

Whilst performing with the Spider-Slayers over the Radio Free Medianet, Adrian Toomes of Toomestone Records cut power to the concert. This led to a fight between the Spider Army and Toomestone Records' security which was cut short when a rift between Earth-138 and Earth-93726 appeared in the sky, and Spider-Ham 2099, Ducktor Doom 2099, and Doom's Duckbots attacked the fighters.

Spider-Man hogtied Spider-Ham 2099 and went to Earth-001, home of the Web-Warriors asking for them to help stop Ducktor Doom 2099's invasion. Although most of the Warriors had difficulty whilst fighting the Duckbots, Spider-Ham easily stopped them with "the wind-up," a maneuver in which Spider-Ham rotated his arm so fast it created a tornado that swallowed the enemy forces and took them far away.[6]

This was not the end of interdimensional visitors to Spider-Man's world however as, the instant ducktor Doom 2099 and his Duckbots were returned home, two giant robots modeled after Spider-Man and Doctor Octopus appeared. Spider-Man and the Web Warriors began attacking "the one that doesn't look like Spider-Man" but were no match for the villain's Mega Morph's abilities.

Spider-Girl suggested that Lady Spider could build a communicator, like the one Pavitr Prabhakar built on Earth-803,[8] using materials from Mega Morphs Spider-Man's Mega Morph.[9]

According to Kang the Conglomerator, Hobie will die in the line of duty at a young age. Because of this, he remained a household name even into the year 2099. Kang owns his likeness and Spider-Man became his most profitable property.[1]

Seemingly those of Peter Parker of Earth-616.

Seemingly those of Hobie Brown of Earth-616.

Like this? Let us know!
Retrieved from "https://marvel.fandom.com/wiki/Hobart_Brown_(Earth-138)?oldid=6121387"
Community content is available under CC-BY-SA unless otherwise noted.