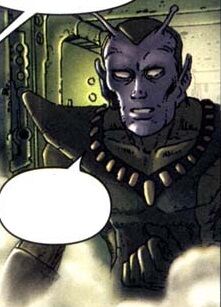 Hobgoblin was a shape-changing member of the Imperial Guard, who protected the site of the M'Kraan Crystal for his emperor, D'Ken.[1]

During the Kree/Shi'ar War, Hobgoblin was apparently undercover on a Shi'ar warship.[2]

Hobgoblin died while protecting Empress Lilandra during a royal ceremony. He acted as her royal body double, and was killed by an assassin's strike.[3]

Omni-Morph: Shape-shifting into any form imaginable, regardless of size, & able to utilize the inherent abilities of the assumed form, if applicable (e.g. dragon form = fire breathing, etc.).[4]

Like this? Let us know!
Retrieved from "https://marvel.fandom.com/wiki/Hobgoblin_(Imperial_Guard)_(Earth-616)?oldid=5796939"
Community content is available under CC-BY-SA unless otherwise noted.