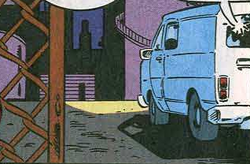 Cardiac lured Stone to a research facility in Hoboken to kill Styx. Cardiac's plan was eventually foiled by Spider-Man, who managed to defeat the pair of villains as well.[1]

A short time later, Flash Thompson received a letter of invitation to a Halloween party at the Daily Bugle.[2]

He was later visited by Betty Brant.[3]

Betty eventually came back and promised to help him overcome his alcoholism.[4]

Flash was also visited by his sister, who refused to help him.[5]

In the story Ayehearya, apparently happening in Earth-9047, Hoboken and Neuter Tokyo are the last standing cities after World War III. The story takes place in Neuter Tokyo, with Hoboken being mentioned in passing only in the opening description.[6]

Like this? Let us know!
Retrieved from "https://marvel.fandom.com/wiki/Hoboken?oldid=6161542"
Community content is available under CC-BY-SA unless otherwise noted.