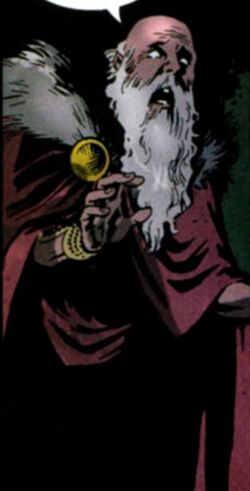 Hoder was an ancient Asgardian god and the blind brother of Balder Odinson according to certain accounts of Norse mythology. According to those same accounts, Hoder was once a virile and stalwart young warrior killing dozens of frost giants and bedding many maidens. One night, Hoder tried to rape Idunn, keeper of the Golden Apples, after getting drunk and aroused after a battle and in revenge Idunn denied him access to the apples and the eternal youth the other Asgardians possess.[4]

Goddess Frigga made everything in existence swear never to hurt Balder, except for mistletoe, which was deemed too young to demand an oath from. Since then, some gods amused themselves by throwing weapons at Balder and seeing them fail to harm him. Loki Laufeyson tricked Hoder into shooting a mistletoe arrow at Balder.[5] In attempt to cover his deception, Loki killed Hoder with Heimdall's sword before he could reveal his deceit.[4]

Superhuman Class 50. Hoder possesses the strength of an average Asgardian male, and is therefore able to lift around 30 tons.[7]

Like this? Let us know!
Retrieved from "https://marvel.fandom.com/wiki/Hoder_Vilison_(Earth-616)?oldid=6075924"
Community content is available under CC-BY-SA unless otherwise noted.