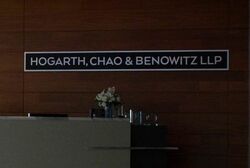 Hogarth, Chao and Benowitz is one of the top law firms operating in New York City. It is a partnership of Jeryn Hogarth, Linda Chao and Steven Benowitz.

Hogarth had tried to get Jessica Jones take a job as the resident investigator at her firm, but Jessica told her that she preferred to freelance. Hogarth then hired Jessica to investigate a case about a brain-damaged pole dancer. Hogarth later berated her about her aggressive tactics in finding the information she needed. Hogarth refused to give Jessica her payment for the case early so that Jessica could fly to Hong Kong.[1]

When Jessica brought the case of Hope Shlottman to Hogarth, Hogarth rejected the story of Kilgrave, a man who had allegedly mind-controlled the girl to kill her parents. Jessica persisted, however, and ultimately convinced Hogarth to take the case.[2]

Later, Jessica stopped Hogarth as she was entering the courthouse and demanded that Hogarth be her lawyer if she was to convince Hogarth's estranged wife Wendy to sign divorce papers. Hogarth soon learned that Jessica planned to have herself arrested and thrown in prison. Hogarth, Chao & Benowitz defended Jessica when she was arrested, but Jessica did not want to be defended: she wanted to go to Supermax. Jessica grew angry with Hogarth while they were still in the interrogation room and fired her, saying that she would represent herself instead.[3]

Marci Stahl later accepted a position at the law firm.[4]

Hogarth Chao ad Benowitz offered Foggy Nelson a position at the company after his dealings with the Frank Castle case. He was given his own office secretary and a chance to become a named partner.[5]

Retrieved from "https://marvel.fandom.com/wiki/Hogarth,_Chao_and_Benowitz_(Earth-199999)?oldid=6094331"
Community content is available under CC-BY-SA unless otherwise noted.