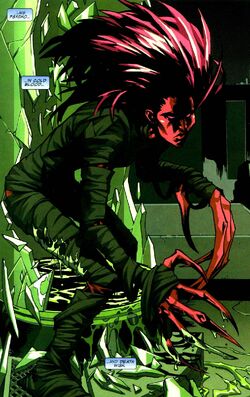 Monet St. Croix is the sister of Marius, Claudette, and Nicole St. Croix. When her brother Marius, who would later become the mutant Emplate, first manifested his powers, the conceited Monet often verbally abused him. An enraged Emplate transformed her body into a hardened, spiked, red state and left her mute. He then told her to "consider this your penance." Claudette and Nicole, realizing how dangerous their brother was becoming, banished him to his own pocket dimension, but he managed to bring Monet with him, who takes the name Penance. Nicole and Claudette, knowing Monet was their parents' favorite, decide to merge into one body with the appearance of Monet.[1]

Shortly after the formation of the mutant teen team Generation X, Penance was dropped onto the front lawn of the Massachusetts Academy by Gateway, who revealed her identity as Penance.[2] She was brought inside by headmaster Banshee, who discovers her powers as he cut his hands by trying to pick her up. As Penance cannot speak, understand English (apparently), and with immunity to telepathy, Banshee placed her in the infirmary as Banshee and Emma Frost attempted to discover her identity. Teen member M, her relation to Penance unknown, used deductive reasoning to suggest Penance was perhaps a prisoner of Emplate, whom the group had encountered previously while keeping her personal knowledge of Penance private.[3]

Penance awakened with one thought on her mind: survival. Tearing apart her cell and escaping, she was free. Hearing the alarms of a breach, the team rushes to the infirmary and stares at the extensive damage she caused during her escape. The team splits up to find her before she can cause further damage to the Academy. Team member Chamber, feeling a kindred spirit due to his own mutilated body, leaves the group to search for her alone. Feeling that another deformed soul would seek him out, he waited for her arrival. After Penance fights her way past the rest of the team (Husk, Synch, Jubilee, and M), she approached Chamber, who talked telepathically to her in an attempt to convince her that he knows how she feels and eventually calms the girl down into staying with the team.[4]

During her stay at the Academy, Penance would rarely interact with her peers, due to her animalistic nature and fright of being captured again. Fortunately, perhaps due to her time with the feral mutant Wolverine, Jubilee becomes a friend to her. Trusting her friends more, Penance begins to go on missions with the others[5]. In a subsequent mission, presumably, to cover up their relation, Emplate refers to her as "Yvette" and the others grow somewhat weary of Penance.[6]

Finally, M reveals that she is a combination of two sisters, and tell the others the truth about Penance, and that they feel horrible about impersonating their sister. To "make things right", the twins, now split apart, merge once more into the form of Monet and swap places with Penance, freeing the real Monet at last, with the merged twins taking over as Penance's body.[7][1]

Monet, free at last, continues to operate under the twins' codename of M, while the twins retain the identity of Penance. Both remain a part of the Generation X team, while still trying to cure the still mute Penance. Later, an explosion frees the twins from the Penance body, but the body would continue to function as though a mind is still inside it.[8]

When the school was no longer deemed safe for them, Emma spoke to Ambassador St. Croix to take Penance along with the mutants Artie Maddicks and Leech to Morocco.[9]

Penance later reappeared under the codename Hollow. She has been held captive by MGH-harvesting drug dealers. Penance trying to convince Ricochet that she isn't a threat, though he has been avoiding her claws. Lightspeed (following Johnny out of concern) lands between the two and uses her Kymellian powers to mesmerize Penance, but was stabbed through her shoulders instead. [10]

Later, Penance encountered the rest of the group at the hospital (where Julie was recovering); where she sensed a kindred spirit within Phil Urich. She also sensed the ones to imprisoned her, including a mysterious woman who called her "Hollow". It was Mickey Musashi's discussion with the woman that allow Hollow to remain with the group and which allows her to be staying at Phil's residence. While she is sleeping and Phil is washing dishes, when she was awakened by the sound of him smashing them (when he saw an image of himself as the Green Goblin and her kissing) and tries to comfort him. [11]

Hollow was shown to be one of the new students at the Avengers Academy. She was present when playing puling the rob along some of the Loners against Lyra. When Jocasta was seemingly "killed" Hollow was one of the student to gather and to see what happened.[12]

When the kids on Cyclops side of the X-Men tried to escape from the Academy, Hollow sided with them.[13]

Diamond Form: Red diamond-hard skin and extended razor-sharp claws on their fingers, toes, and hair follicles that are sharp enough to shred the skin of anyone touching her. Because of the density of the skin, it also has a highly reduced capacity for physical injury, as well as a mind that is resistant to psychic intrusion. Her skin absorbs light, making her appear to be in constant shadow.

Penance seems to be mute, whoever is in the body. However, she pronounced the word 'like' during her adventures with the Loners.[14]

There are indications in several sources that the creators had originally intended for Penance to have a different identity. In Generation X #8, Emplate refers to her as "Yvette," which is not associated with any of the members of the St. Croix family. In Generation X #12, Emma Frost reveals memories of tanks and soldiers from Eastern Europe. In the Generation X Ashcan Edition, it is revealed that the writers had originally intended for her to be a girl from Yugoslavia named Yvette.

The Loners writer C.B. Cebulski has revealed that the Hollow/Penance body has a new host: "Is there someone inhabiting it at this point. Yes. Who is it? Wait and see!"

Like this? Let us know!
Retrieved from "https://marvel.fandom.com/wiki/Hollow_(Earth-616)?oldid=6075970"
Community content is available under CC-BY-SA unless otherwise noted.