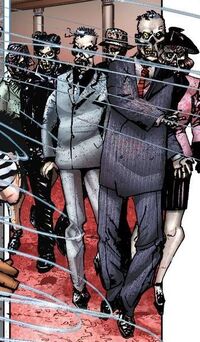 Not much is known about the Lord of Death, a Nazi sympathizer, he would be the inventor of "Di-Namo Fluid". Replacing human blood with this fluid would turn people into mindless zombies that would be unstoppable short of destroying their bodies. His work would attract the attention of Hitler himself who would personally oversee his mission of disrupting the American military effort before they could enter the war.

Stationing himself in the Bowery section of New York, he would lure members of the large homeless population into his lair, promising food and work. Instead, he would drain the homeless people of their blood and turn them into zombies with the Di-Namo Fluid. He would unleash these zombies to attack a nearby navy ship being guarded by Steve Rogers and Bucky. Changing into Captain America and Bucky, the two would fight off the zombies. Posing as homeless men, they would be lured into the Lord of Death's lair where they would learn of his plot.

Changing into their costumed identities, they would easily defeat the overweight Lord of Death, knocking him into his own machinery, killing him.[1]

In the late 1950s, Geoffrey Sydenham recreated the Lord of Death's dynamo fluid and produced a large group of Hollow Men to be used as part of ICON's forces. One group of these Hollow Men were created in a secret hideout in Latveria which Nick Fury and the Blonde Phantom invaded while seeking information on a supposed new Nazi movement. Finding only the zombified Hollow Men, Fury blew up the base before the two adventurers fled the scene.[2] Sydenham had a second group of Hollow Men stationed in Washington D.C., though these were later defeated by Sabretooth and Namora when they defeated ICON's forces and captured Sydenham.[3]

Retrieved from "https://marvel.fandom.com/wiki/Hollow_Men_(Earth-616)?oldid=4476418"
Community content is available under CC-BY-SA unless otherwise noted.