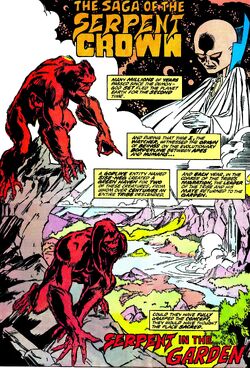 About one million years ago,[2][3] the "evolutionary bordeline between apes and humans" emerged:[4] Homo erectus.[5] Two of that kind were given a paradise-like haven by the time-travelling godlike entity Sise-Neg, spawning a tribe over the centuries, the Wanderers, that had their leader and its mate to return each year (in the course of the tribe's migration) to the Garden,[4]

One year, they encountered the Tribe of Set, who offered the two to join them, by killing their own tribe and helping Set's followers to approach the Celestials. The ape-men rejected the evil offer, revealing the Tribe of Set as the Serpent-Men. The Wanderers tribe drove them out the Garden, the end of the battle witnessing the arrival of the Celestials, ten of them, as part of the First Host,[6] under the kind surveillance of Gaea.[4]

Gaea encouraged the Wanderers to go towards the Space Gods,[4] and Gammenon the Gatherer collected Man-Ape of the Wanderers[4] he send to Ziran the Tester who mutated them to have an unstable genome, creating the Deviants (Homo descendus),[7] a race with various mutations, who were then released and went hiding in the caves.With other subjects, Nezarr the Calculator then created the Eternals (Eternals (Homo immortalis)),[2] hairless, upright tall beings able to tap into the cosmic power. They were themselves released, flying out of the Celestials' laboratory-ship. Finally, Oneg the Prober created a latent gene[6] (or "latent genes",[4] "mutant genes")[5] for the expansion of human potential.[6] The Serpent-Men tried to usurp the Wanderers' place but were drove out by Arishem the Judge.[4]

After weeks of experiments, the last subjects of Oneg were released and the Celestials left the planet.[6]

The Homo erectus were the dominant species at the Dawn of Man.

A group of them was targeted by the Eternals, some killed and others abducted in order to create the first Deviants on Earth. Those were at first thought a failure, but quickly appeared as a success with a result closer to Eternals than to Deviants, by creating a female that was claimed by Kurassus as sex doll. The Eternal leader Ikaeden agreed on creating others for Kurassus and all Eternals.

Using the Apple, Ikaeden was able to enhance the female comprehension, wanting to made her his intermediary and personal servant, rather than give her to Kurassus' perversions. In three months, a vast population was transformed, proving themselves to be the most efficient Deviants ever. Meanwhile, the Eternals used the female Deviants for sexual services.

Five months after First Contact, a Pyramid was in construction. Some Deviant females were impregnated and dealt with, while the Eternals were now forbidden by Ikaeden to procreate, save for Kurassus.

Eight month later after First Contact, the Pyramid was finished. The Deviant woman used the Apple again, becoming able to actually speak and admitted her love to Ikaeden. She choose the name of "Jeska" (the Celestial word for "fire"). She then spoke with another Deviant, was witnessed by Kurassus and brought before Ikaeden for interrogatory, who took her under his protection.[9]

Like this? Let us know!
Retrieved from "https://marvel.fandom.com/wiki/Homo_erectus?oldid=6502861"
Community content is available under CC-BY-SA unless otherwise noted.