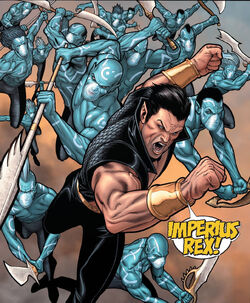 The Homo mermani or Homo mermanus are often referred to as Atlanteans, as it is in the city of Atlantis that their first complex society on Earth emerged.[6]

Atlantis itself had been a small above ground continent with many human settlements, when an event 10,000 years ago called the "Great Cataclysm" caused it to be submerged into the sea. 2,000 years later, a group of Homo mermani made the ruins of the human settlements in Atlantis their home and went on to develop a society there using as much of the material as they could scavenge from the wreckage.[7]

The "Homo mermani" are in fact native to the planet Vodan;[8] however, the history of their immigration to Earth,[4] and other related origins, were lost,[9] and unknown even to the likes of the Logomancer,[10] though a few theories (some possibly cumulative) exist:

When the humans returned into the oceans as Homo mermanus, they woke up the ancient evil that dwelt there, the first rulers of Earth, hideous things that had built huge cities, worked uncanny magic, enslaved servants that lived and died in their dark glory. This evil had gone for a time when the stars had turned round in the sky.[10]

Using Sh'g'th tissue, a formless substance used to create unholy life, and created the first Aqueos, who went to live in R'llyeh.[13]

The Great Old Ones, and their spawn, the Aqueos, lived (among other cities)[14] in R'llyeh, also known as "the First Atlantis".[10]

500 years after the settlement of Atlantis, another group of Homo mermani left Atlantis to found their own city - this time in a part of the ruins of another continent submerged during the Great Cataclysm - Lemuria in the Pacific Ocean.[citation needed]

These "Lemurians" would discover the Serpent Crown in the ruins of their city, and through their leader Naga's exposure and extensive use of the ancient mystical device, they would become more serpent-like in appearance than their Atlantean cousins.[citation needed]

During the 20th century the Homo mermanus race began to come into sustained contact with their human "cousins". These contacts have often been hostile, and have included many aborted invasions and even separate occasions when large numbers of Homo mermani were rendered comatose or sterilized for periods. During the Second World War the kingdom of Atlantis also fought against the Axis Powers in alliance with the Allied Powers.[15]

However, not all interactions between Homo sapiens and Homo mermanus have been hostile: During the 1920s a Homo mermani female, Princess Fen of Atlantis mated with the human sea captain Leonard McKenzie, a union which produced the first human/Atlantean hybrid: Namor, the Sub-Mariner.[16]

Amphibious Physiology: Most Atlanteans can only survive out of the water for about 10 minutes without artificial aid.[18]

Superhumanly Acute Senses: Atlanteans are specifically adapted to living in the ocean. Atlanteans' eyes are capable of seeing with perfect clarity, even in the near-total darkness of the ocean floor. They are also able to hear and smell under the water as well as humans do on land.[18]

Superhuman Strength: The average Atlantean can lift about 4 tons.[18]

Superhuman Speed: Atlanteans can run and move at speeds greater than the finest human athlete. Their superior speed also extends into swimming and he can reach a top speed of about 30-35 miles per hour.[18]

It is not known precisely how many Atlanteans there are in the world today. The number is believed to be fewer than ten thousand, an extremely small figure when compared to the surface human population of more than six and a half billion. About two thousand live in the capital city of Atlantis and its immediate vicinity. Others live in small enclaves from pole to pole.[17]

Most Atlanteans live in caves on the ocean floor or the submerged portions of coral reefs. The inhabitants of the capital city of Atlantis live in the ruins of the ancient city of surface Atlantis. Because there can be no fire under water, the Atlanteans have lacked the capacity to forge steel or burn fossil fuel for energy. Because of the aquatic medium in which they live, they were also unable to isolate or mix chemicals. Consequently, the Atlanteans never developed a native technology beyond that of flint tool making. Swords and armaments used in warfare were largely salvaged from the ruins of surface Atlantis or sunken ships of human construction. It is only in the past century, through interaction with scientists of the non-human Deviant race, that any form of advanced technology was developed. Astronomy, chemistry, biology, and physics remain virtually unknown sciences. Medicine has remained primitive, with drugs unheard of and surgery impossible under water. No system of mass communication has ever been developed, nor any means of mass transit.[citation needed]

With Deviant technology, Atlanteans built their first warships at the outbreak of World War II.[citation needed]

Atlantean government has traditionally been tribal, although the citizens of the capital city of Atlantis have adopted the stylings of a monarchistic republic from their long-dead surface predecessors. Besides an ancestral monarch, Atlantis has a Council of Elders, who serves as the judiciary and legislative branch of government. Atlantis has a standing militia who perform police functions in times of peace. Although the monarchy of Atlantis claims all Homo mermani dwelling in the Atlantic Ocean as its subjects, in actuality the monarchy neither provides services or protection nor demands tribute or recognition from those who live beyond one day swim from the capital city. Most Homo mermani continue to live tribally. The largest grouping of Atlanteans in the Atlantic Ocean outside the capital city are ruled by the barbarian warlord Attuma.[citation needed]

Atlanteans subsist on raw fish and seaweed. They are largely a hunter / gatherer society, who have made successful attempts to farm seaweed. In most of the Atlanteans tribes, male hunt for fish and females gather seaweed. In the monarchy of the Atlantean capital, society is stratified so that there is a special guild of hunters and gatherers who provide food for the entire population. This frees the rest of the society for other pursuits, such as the advancement of culture. The culture of the tribal Atlanteans remains primitive, with ritualistic dance and storytelling at its core. The culture of monarchic Atlantis is slightly more sophisticated, with its class or guild of entertainers. The religion of most tribal Atlanteans is pantheistic nature-worship. The state religion of monarchic Atlantis holds in reverence the Greek god of the sea Neptune, who once lived among the Atlanteans some two millennia ago before leaving them. The Atlantean Empire in many ways resemble the ancient Roman Empire at its zenith.[citation needed]

Atlanteans communicate by means of a limited range of high-pitched vocal sounds and elaborate "signing" gestures. A more varied spoken language is not possible due to the inherent limitations of sound transmission through water.[1]

However, a spoken and written language exist. Please consult here our Atlantean Dictionary.

Atlanteans possess twin gills located on their necks near the clavicle bone, which enable them to extract oxygen from the water. They possess physiologies far stronger and more durable than their surface counterparts, which enable them to withstand the vast water pressure at the ocean's bottom as well as the pressure changes encountered traveling from one depth to another.[citation needed]

Atlanteans are warm-blooded, and their blood circulation is superior to that of land-dwellers, enabling them to withstand the near-freezing temperatures of the ocean depths with minimal discomfort.[citation needed]

Atlanteans have specially-adapted eyes possessing vision more sensitive to the green portion of the spectrum. This enables them to see more acutely in the dimly lit ocean depths.[citation needed]

Atlanteans need water in order to breath, and will suffocate in open air in about five minutes, though Fen, Namor's mother, used a potion that allowed her to breathe air for five hours, but eventually began to breathe air and underwater permanently.[citation needed]

Atlantean skin tends to be light blue in color, although certain individuals are darker.[citation needed]

Atlanteans possess residual body hair primarily on their heads, a holdover from their surface-dwelling ancestry.[citation needed]

Despite their various marine characteristics, Atlanteans are mammals: they bear their young live and care for them during infancy. Although rare, it is possible for an Atlantean and an air breather to mate. The physical characteristics such an offspring will inherit are subject to genetic chance. In the known cases of such matings, the offspring acquired the capacity to breathe in both air and underwater.[citation needed]

The life expectancy of an Atlantean is about 150 years.[citation needed]

The Atlanteans, as their cousins the Lemurians, have proved to be fertile with humans, and generate from those unions mutant hybrids, fertile or not.[citation needed]

It was hinted by Steve Rogers that the hybrid combination of human and Atlantean led to the power set, immense strength and winged ankles among others, shared by Namora and Namor.[19]

Fertility of the Hybrids

But Namor has been shown in many realities to be able to reproduce with Atlanteans (Dorma, Abira), mutated humans (Susan Storm) or even aliens with the Plodex Marrina.[20] Full list of known human-atlantean hybrids

Many mutants and powered beings are born among the Atlanteans. Their true biological nature is quite unknown, but were stated to be Atlantean mutants Crosta by Juston's Sentinel,[21] Attuma (Earth-2189) (by Namora),[22] and Surf members Undertow, Sharkskin and Eel.[23]

Those mutants aren't to be confused with the human/atlantean hybrids mutants, which their mutancy is supposed or confirmed to came from an X-Gene, developed within the human genetics.

A rare Atlantean offshoot or subspecies with the inherent capacity for casting magic through song.[24]

The few of whom to have made appearances to date were largely female. These waterbreathers are capable of surviving on dry land without the need of water filtration systems or conversion serum's which have been used to temporarily or permanently transform other mariner races into surface dwellers. Full list of known Atlantean Sirens

Their physiologies evidently adapted lungs as well as gills in order to carry their narcolepsy inducing tunes either on dry land or in the depths.[25]

Retrieved from "https://marvel.fandom.com/wiki/Homo_mermanus?oldid=6483104"
Community content is available under CC-BY-SA unless otherwise noted.