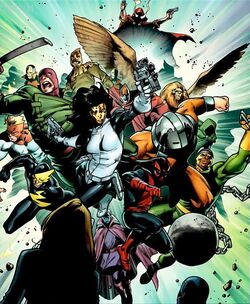 We're going to organize. We're going to work together. We're going to help each other get what we want, when we want it. Because I know you're going sick of Ryker's and you're sick of the Raft--and you're sick of living in the shadows and wondering where the next nut will come from. Or worrying which costumed @##$$ is going to break down your door and ruin your life. But here's the new news... Captain America is dead. Nick Fury is gone. The heroes are fighting the heroes. And half of the heroes are running for their lives... While the other half aren't allowed to move unless Iron Man tells them to. Since Wilson Fisk was put out to pasture it's been even more chaotic for guys like us than it's ever been. There's no structure to any of it. I say we replace that chaos with something new. With us.

Hood formed this group of criminals during his tenure as the Kingpin of Crime in New York City. While the New Avengers were fighting a symbiote outbreak in Manhattan, Hood used a Deathlok to rob a bank in New Jersey, then used the proceeds as seed money to recruit a large number of supervillains. As luck would have it, a recent breakout had left most of the villains free, but struggling to get by, so his offer was well-received.[5]

With a close council of advisors and enforcers, Hood led his people in a fight against Luke Cage's New Avengers, which he lost through the actions of Doctor Strange. However, the Hood was able to use his magic gear to get them out of jail quickly.[6]

The group was active during the Skrulls Secret Invasion, where they sided with the other human heroes against the aliens.[7] As Hood's syndicate was attacking the Skulls, it was revealed that they had known there were Skrulls in hiding as Skrull agents had tried to replace Madame Masque but failed. When advised to use his magic to scan the villains present, Hood discovered that Slug had been replaced by a Skrull and killed him.[8]

In the wake of this, the group began to benefit from their leader's alliance with Norman Osborn,[4] the new American homeland security czar and head of the S.H.I.E.L.D. replacement known as H.A.M.M.E.R.. In this new environment, the organization consolidated its control of the New York criminal underworld, and began to spread in new directions: sending members to join the Initiative[3] and also tried to control the zombie virus.[9] At the same time they continued to face opposition from rebel heroes such as the New Avengers[10][11] and the Punisher,[12] and even from independent villains, like Enforcer[13] and Mister Negative.[14]

During this time, Jonas Harrow, a high-ranking member of the group, found the remains of a device intended to nullify superpowers, and rebuilt it, able to include or exclude people from its effect. When the Hood lost his powers and had to go on a journey to recover them, Harrow struck, taking control of the gang and fighting the New Avengers and Osborn's "official" Avengers team. When Hood got back, he killed Harrow and retook the group.[15]

In the wake of this, the group became part of Norman Osborn's plan to invade Asgard, with the promise of government-mandated immunity from prosecution for all members if they were successful.[16] Unfortunately, due to a combination of plans coming to fruition, the invasion was thwarted, and in the confusion, the group's members were all either arrested or had to flee, and the group's power was spent.[17]

Years later, The Hood took a second shot at becoming the new kingpin of New York following Wilson Fisk's exit from the underworld.[18] After the fall of Kingpin runner-up Diamondback at the hands of the Defenders, The Hood grabbed hold of his territory and operations. He reunited many former members of his old army, and intended to form a new alliance, dividing New York in territories and assigning one supervillain to act as said territory's indisputable kingpin. Even though the meeting was interrupted by the Defenders and numerous of their allies,[19] the reformation of The Hood's army moved forward. One of their first actions consisted on targeting Victor von Doom, who had turned a new leaf and had become the new Iron Man.[20]

Hood's Gang ambushed Iron Man in the ruins of Castle Doom where Hood used his demonic bullets to knock him off balance, allowing the rest of the army to gang up on him and knock him out. With Victor von Doom down on the ground, Hood ordered his minions to tear the place apart and uncover its secrets.[21] Wrecker worked to open up Victor's Iron Man armor as he was being restrained by Rampage and Shockwave. Before Wrecker could finish the job, Victor teleported away in a bright flash. Hood suspected that he and Tony Stark were connected and that they had to find Tony Stark in order to get to Victor's wealth.[22]

Like this? Let us know!
Retrieved from "https://marvel.fandom.com/wiki/Hood%27s_Gang_(Earth-616)?oldid=5857199"
Community content is available under CC-BY-SA unless otherwise noted.