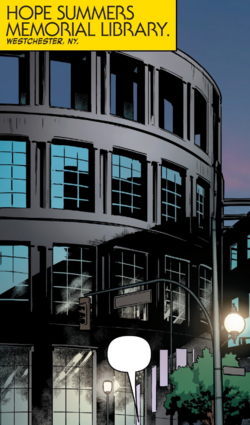 This four story library was named after the famous X-Men leader, Hope Summers, after her sacrifice which led to the Resolution. Many students from the Summers Institute used this library to study for the many courses that they were in.[1]

Later a group of followers of En Sabah Nur planned on bombing the library as they thought it was an institute designed to spread false information and not the real truth.[2]

It was seemingly destroyed along with the rest of the planet when Magneto used the Life Seed to allow the mutants to leave the Age of X-Man.[3]

Like this? Let us know!
Retrieved from "https://marvel.fandom.com/wiki/Hope_Summers_Memorial_Library?oldid=5226448"
Community content is available under CC-BY-SA unless otherwise noted.