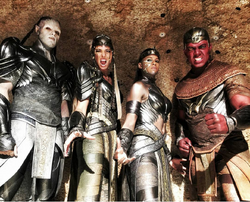 In 3600 B.C., Apocalypse was growing old in his current form. Aided by his Horsemen, he performed a ceremony that would allow him to transfer his consciousness and previously-acquired abilities into a new host, a mutant who had enhanced healing. His priests began the transfer, but a coup was launched by a few of his servants. All the Horsemen were killed while defending their master. En Sabah Nur's life was saved in the process.[1]

Retrieved from "https://marvel.fandom.com/wiki/Horsemen_of_Apocalypse_(Earth-10005)?oldid=5644096"
Community content is available under CC-BY-SA unless otherwise noted.