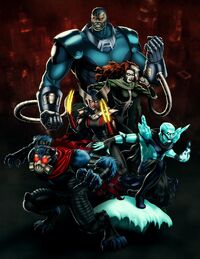 Origin
This team of Horsemen was created as Apocalypse's answer to the incursion crisis.

When he returned, Apocalypse used Mr. Sinister, Sugar Man, and allies in the Hellfire Club and Brotherhood of Evil Mutants to capture four of the X-Men to make into his newest Horsemen. He started by sending Avalanche, Toad, and Living Pharoah to capture Beast and Rogue in New York City. He subsequently used Sinister to transport Beast to London and Rogue to San Francisco. In London, Selene, Avalanche, and Dragoness helped capture Iceman, while Living Monolith, Blob, and Toad ambushed X-23 in San Francisco.

After they were transformed, Apocalypse sent his new Horsemen to wreak havoc around the globe and test who was fit for survival. Iceman/Death was sent to New York, Beast/Pestilence remained in London, X-23/War was sent to Wakanda, and Rogue/Famine remained in San Francisco. After the Alliance managed to defeat the individual Horsemen, they withdrew to New York where the final confrontation with Apocalypse himself took place. Once Apocalypse was defeated, they were freed from his control.[1]

Retrieved from "https://marvel.fandom.com/wiki/Horsemen_of_Apocalypse_(Earth-12131)?oldid=5547772"
Community content is available under CC-BY-SA unless otherwise noted.