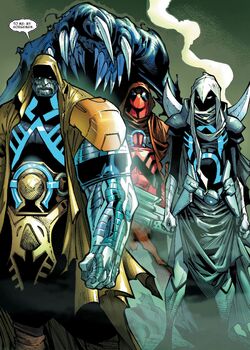 After his return in the early twenty-first century, in which Earth was destroyed and its remnants turned into the Omega World,[1] Apocalypse created a new team of Horsemen composed by Deadpool, the Venom Symbiote, a Moon Knight, and the Man-Thing to keep order on his new world.

When Colossus and his team of young X-Men ended up on Omega World after being accidentally teleported by the Sugar Man's time-machine, the Horsemen of Apocalypse felt their presence and attacked them for corrupting Apocalypse's domain. However, the Horsemen were only capable of subduing Colossus, as he hold them off long enough for the young mutants to flee.[2]

As the young mutants were in possession of an ark containing six hundred mutant embryos, the Horsemen were ordered by their master to find and kill them, and retrieve the ark. At some point during the year the Horsemen spent searching for the other mutants on Omega World, Colossus was converted into one of them.

The Horsemen of Apocalypse finally found the young mutants in the Mole Men's territory, accompanied by a team of X-Men led by Storm, who had followed Colossus and his team through the timestream in order to rescue him.[3] They engaged the X-Men in battle and defeated them, taking the ark from them and teleporting back to Apocalypse's Kingdom afterwards.[4]

Retrieved from "https://marvel.fandom.com/wiki/Horsemen_of_Apocalypse_(Earth-16558)?oldid=5284514"
Community content is available under CC-BY-SA unless otherwise noted.