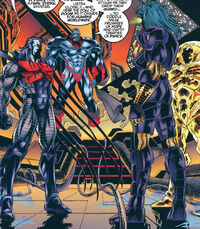 The Horsemen of Apocalypse were the elite among Apocalypse's forces. The earliest incarnation of the Horsemen included Sabretooth, Candra, Gideon, War, and Death. They were dispatched to Cape Citadel to take control of its nuclear stockpile and use it against humanity. Their attempt was thwarted by the newly formed X-Men. Gideon was slain in the process.[1]

Over the years, members of the Horsemen were killed and/or replaced by others. War was killed by Holocaust, Apocalypse's son. Candra was also slain by Holocaust.[2] Death was replaced by Maximus, ruler of the Inhumans. When Maximus was keeping Apocalypse during a period of recuperation he attempted to slay Apocalypse and take over his empire. Prelate Cyclops thwarted this by aiding the X-Men in defeating him. Maximus was slain by Sunfire.[3] Another member was Bastion who was slain and replaced by Abyss. The final incarnation of the Horsemen consisted of only four members: Holocaust, Mikhail Rasputin, Abyss, and Sinister.[4]

In the final days of Apocalypse's regime the four Horsemen pursued their agendas: Holocaust oversaw the cullings of humans in Chicago only to be defeated by the X-Men.[5] Abyss attempted to prevent a Sentinel evacuation of humans, but was foiled by the X-Men. He later tortured the X-Man Bishop until he was rescued by his comrades, and Abyss was slain.[6] Sinister defected,[7] and disguised as Essex, monitored his creation Nate Grey until Nate discovered his true identity and seemingly slew him.[8] Mikhail relocated to London where he attempted to trick the human population into participating in his Upstart Program to create an army of cyborgs to overthrow Apocalypse until he was slain by Donald Blake.[9]

Following the death of Apocalypse, only two members of the his Horsemen survived. Holocaust escaped to Earth-616 during the final battle against the X-Men.[10] Sinister also survived and went into hiding to continue his experiments until he was tracked down and killed by the X-Men.[11]

Retrieved from "https://marvel.fandom.com/wiki/Horsemen_of_Apocalypse_(Earth-295)?oldid=5547778"
Community content is available under CC-BY-SA unless otherwise noted.