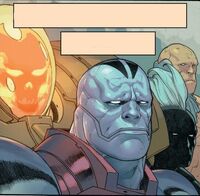 Origin
Once the rulers of their own domains, the Horsemen were subjugated by Apocalypse, who conquered their lands and forced them to serve him.

The Horsemen of Apocalypse were the chief servants of Baron Apocalypse. Once, the Horsemen were barons of their own domains, but all were conquered by Apocalypse, who forced them into servitude.[1]

The Horsemen were charged by Apocalypse to find and retrieve Douglas Ramsey. Holocaust managed to track him down, but was killed by the X-Men when they shattered his armour casing. Sabretooth was also dispatched to track down Ramsey. Sinister meanwhile, was asked to assess the Friends of Humanity.[2]

Learning that the humans had some sort of super-weapon capable of destroying all mutants, the Horsemen launched interrogations. Sabretooth interrogated Jean Grey, a telepath working at Angel's club, while Abyss and Sinister interrogated Sheriff Danvers, the peace keeper of the human district. Uncovering the location of the humans' weapon, revealed to be the Legacy Virus, a plague capable of wiping out mutantkind, the Horsemen ordered an attack on the human district in order to find it. Their forces were intercepted by the X-Men however, and eventually Apocalypse himself arrived and unleashed the virus, declaring that those who were truly worthy of living would survive it.[3]

The Horsemen personally intervened, initially fighting the X-Men with Apocalypse, but when it became apparent that Apocalypse himself had been infected with the virus, they turned on him and helped the X-Men kill him.[4]

When Doctor Nemesis, now possessing a multitude of mutant powers, attacked them all, Sabretooth was killed. Sinister however managed to repair Jean Grey's mind, realising that restoring the Phoenix would be the only way to cure the virus and stop Nemesis. He succeeded, and the Phoenix used her powers to de-power every mutant in the domain, making them all humans.[5]

Retrieved from "https://marvel.fandom.com/wiki/Horsemen_of_Apocalypse_(Earth-51518)?oldid=5756567"
Community content is available under CC-BY-SA unless otherwise noted.