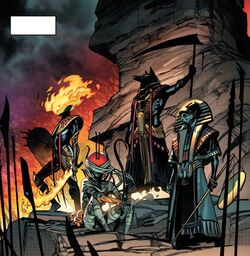 The Horsemen of Apocalypse was the main strikeforce of the mutant tyrant Apocalypse. They followed their master's philosophy of Social Darwinism the "Survival of the Fittest". They traditionally took the titles of Death, Famine, War, and Pestilence. During their conversions Apocalypse usually augmented their powers and/or outfitted them with specially designed weapons and equipment using his advanced Celestial technology.

The First Horsemen were the sons and daughters of Apocalypse and Genesis from the ancient mutant land of Okkara. When the four children were born, their maternal aunt, Isca the Unbeaten forged the Scarab, a sword in four parts to celebrate their births.[1]

When Okkara was split by a force wielding the Twilight Sword, Apocalypse and his first horsemen fought the invaders. In the end, they were responsible for the sealing of the chasm. The horsemen were sealed on the other side of the chasm alongside their mother and Arakko, to the sorrow of Krakoa.[2][3]

In 281, Decimus Furius activated his powers in Rome and was collected by Apocalypse and "stored" for later use as the War of his Final Horsemen.[5]

In 325, Sanjar Javeed was collected by Apocalypse and "stored" for later use as the Death of his Final Horsemen.[5]

In 1013, Apocalypse came to Scandinavia to kill on the counsel of Rama-Tut who informed him of beings and ancestors of people who would cause a threat to him in the future. He then sent his four Four Horsemen (Pestilence/Phantom Bats of the Twelve Minds, War, Native-American Famine, and Death) to kill Folkbern Logan, ancestor of Wolverine, but they were all destroyed by Thor.[6]

In the fifteenth century, Apocalypse led yet another group of Horsemen and rode among them as well, leading an army of followers known as the Riders of the Dark. This army was so strong and powerful that some were led to believe that they were just a myth to scare soldiers even before their first battle.[7]

In 1459, in Romania, the Horseman of War led the Riders of the Dark, and single-handedly defeated Vlad the Impaler and his army.[7]

In 1833, Ichisumi first activated and was collected by Apocalypse and "stored" for later use as the Famine of his Final Horsemen.[5]

In 1863, Jeb Lee activated and was collected as well by Apocalypse, "stored" for later use as the Pestilence of his Final Horsemen.[5]

The first modern Horseman recruited by Apocalypse was Plague, a member of the Morlocks, whom he recruited during the Mutant Massacre to fill the role of Pestilence. He then approached ex-soldier Abraham Kieros and granted him the position of War. Autumn Rolfson was Apocalypse's third choice and was given the position of Famine. Apocalypse then saved the de-winged Angel from his sabotaged, exploding plane and chose him to be his fourth and final Horseman, Death.[8]

The Four Horsemen were forced to battle one another for leadership, and Death emerged victorious. In a battle against X-Factor, the Horsemen were nearly defeated until Death appeared, shocking his former comrades. Caliban went to Apocalypse and asked for a power boost so he could avenge his fellow Morlocks. Pestilence was slain in the battle and Archangel came back to his senses after assuming he killed his former comrade, Iceman. Apocalypse was forced to retreat with his remaining Horsemen and Caliban.[9]

Caliban replaced Angel on the team and became Death. He captured Cyclops and Jean Grey and took them to Mister Sinister. The X-Men tracked him down and defeated Caliban and Famine and then realized the Horsemen were under Mr Sinister's orders. The X-Men were later defeated by Apocalypse. Caliban battled Sabretooth for revenge of the Mutant Massacre and lost the battle.[10]

After a battle with the X-Men in their mansion, Hulk was discovered by Apocalypse and became his second incarnation of War. Apocalypse set him against the Juggernaut to test his strength. Hulk was able to knock back Juggernaut with the huge celestial energy boost that Apocalypse had given him. He was also able to best the Absorbing Man, but came to his senses when he thought he had injured his friend, Rick Jones.[11]

For his second team of Horsemen, Apocalypse had Wolverine abducted, replacing him with a Skrull impostor[12] to prevent his absence being noted, and pitched him in battle against Sabretooth. The winner of the battle, Wolverine, became his Horseman of Death.[13] Wolverine as Death, battled the X-Men and killed the impostor Wolverine.[14] Apocalypse then turned Deathbird into his second Horseman, War. Caliban was once again chosen to be one of Apocalypse's Horsemen, this time becoming Pestilence. Pestilence and War fought X-Force and captured Cable.[15] In a battle against the X-Men, Death was unmasked and revealed to be Wolverine.[16]

In Apocalypse's lair, Cable escaped and defeated Death in battle. Apocalypse then threatened to kill Caliban. Apocalypse captured Rory Campbell and turned him into his fourth Horseman, Famine. The Horsemen then started collecting "The Twelve". When Death captured Mikhail Rasputin and failed to teleport out with him, he was chased into the Morlock Tunnels by the X-Men. He battled them and regained his memory, thanks to the efforts of Jubilee, Shadowcat, Archangel and Psylocke. The rest of the Horsemen were teleported to another dimension by Mikhail.[17]

Following the House of M and M-Day, Apocalypse resurrected, only to find himself in a world with its mutant population reduced to a tenth of what it had been, out of the millions who populated earth prior to his demise at Cable's hands. Bent on becoming the new messiah for mutantkind, Apocalypse assembled a new cadre of Horsemen, with the purpose of wiping out 90% of the baseline human population.[18]

Apocalypse's new Horsemen were Gazer as War, Sunfire as Famine, Polaris as Pestilence and Gambit as Death. Gazer was saved from death and forced to battle an archaeologist for the mantle of War, which he won with the aid of Apocalypse's majordomo and scribe, Ozymandias. Both Sunfire, who had lost his legs at the hands of Lady Deathstrike and his powers to Rogue and Polaris, an M-Day victim, were captured, and reluctantly altered into Famine and Pestilence, respectively. Gambit, however, submitted himself willingly to be transformed into Death, as he had come to believe Apocalypse could be helpful to the mutant cause though he would require to be watched. Sunfire was able to break free of Apocalypse's control with the help of Emma Frost, although he was weakened by the experience. Polaris was knocked out by Iceman in the final battle. She was abandoned, saved by Havok, and was de-brainwashed by the X-Men. Gazer died defending Apocalypse, stabbed in the back by Ozymandias. Sunfire took Gambit somewhere at the conclusion of the final battle, only to be approached by Mister Sinister.[19]

The Final Horsemen, the contingency plan that Apocalypse had prepared in case of an ultimate failure, emerged and aided Clan Akkaba, Ozymandias and the new Ship in resurrecting their master.[20]

The Horsemen's first test was to protect a recently revived Apocalypse from X-Force.[21] The Horsemen failed however and their master was killed by Fantomex.[22] They reappeared later in service to Apocalypse's newly risen successor, Archangel, who chose Psylocke as Death.[23]

War and Famine were destroyed by the returned Apocalypse Twins.[24]

The Apocalypse Twins, using a set of both Life Seeds and Death Seeds, brought back to life Sentry, Banshee, Grim Reaper and Daken, in order for them to serve as their Four Horsemen of Death.[25]

By the conclusion of their campaign, the Apocalypse Twins were apparently deceased. Banshee was a captive of the Avengers, Sentry had disappeared into space, and Daken and Grim Reaper were left to their own whims.[26]

The First Horsemenn of Apocalypse planned their return and overthrow of Krakoa with their fellow Arakki mutants and Daemon army by waging war on their father and the Krakoan mutants living there. War sent in her son to trick her father and the other mutants living there into building the External Gate, connecting Otherworld to Krakoa. When Apocalypse, and some mutants who volunteered to traverse the gate, decided to cross over to Otherworld to see the danger that Summoner had warned of, he was attacked and betrayed by him and the First Horsemen of Apocalypse, being forced to retreat back to Krakoa to heal their wounds and prepare for war between the two group.[27]

Retrieved from "https://marvel.fandom.com/wiki/Horsemen_of_Apocalypse_(Earth-616)?oldid=5866507"
Community content is available under CC-BY-SA unless otherwise noted.