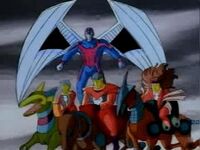 The Four Horsemen of Apocalypse, the lineup was composed of mutants that submitted themselves to the so-called Mutant Cure, developed by Dr. Adler (actually Mystique in disguise). The "Cure" process transformed the four mutants: Autumn Rolfson (Famine), Plague (Pestilence), Abraham Kieros (War), and Archangel (Death) into altered mutants under the control of Apocalypse.[2] Together, they attack a peace conference in Paris where Apocalypse makes his presence known to the world.

The Horsemen laid waste to several global areas; Famine attacked farms seeking to destroy crops, War attacked military bases and turned their weapons against them, and Death struck at a dam causing significant innocent deaths no doubt. The X-Men arrived in Paris to find Pestilence spreading sickness and disease. Storm and Cyclops managed to defeat her, but the rest of The Horsemen arrived. Famine kept Cyclops and Storm occupied while War almost seriously injured Wolverine, but luckily, he was saved by Gambit. The Horsemen retreated to Stonehenge where Rogue had foolishly come to face Apocalypse alone.

Apocalypse, disappointed in his Horsemen, toyed with Rogue and almost killed her with his energy blasts. Luckily, the rest of the X-Men arrived and clashed with the Horsemen once more; War blasted Gambit and Wolverine but he was tripped up by a beam from Cyclops, Jean Grey easily neutralized Pestilence, and in the skies above. Famine narrowly evades Storm's lightning bolts.

As Death was about to attack, Rogue snuck up and touched him, absorbing his memories and energy, nullifying Apocalypse's power over him. Death was distraught by the violent reality of what he has become and lashed out at the Horsemen, defeating them. Apocalypse escaped and so did Death, flying off into the night, ashamed.[3]

The X-Men battled another team of Horsemen, created by Apocalypse during his time in Ancient Egypt. The style of these Horsemen reflected their Egyptian origins.[4]

Transportation: Mechanical horses capable of flight and expelling energy beams from their eyes/mouths.
Weapons: The Egyptian version of Death wields an energy sickle

Retrieved from "https://marvel.fandom.com/wiki/Horsemen_of_Apocalypse_(Earth-92131)?oldid=5190969"
Community content is available under CC-BY-SA unless otherwise noted.