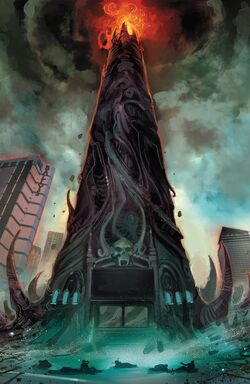 When Las Vegas was ravaged by Hydra during their short-lived reign over America, the entire city allegedly manifested in Hell. Mephisto claimed to have taken advantage of this supposed peculiarity to the city into his domain, and created Hotel Inferno to serve as his base of operations.

In an attempt to revert the destruction caused by Hydra, Doctor Strange used magic to restore Las Vegas and resurrect those killed during the attack. When the city was returned, it was accompanied by the demonic influence, and Hotel Inferno erupted from beneath the earth. When Doctor Strange investigated the structure, he was taken to Mephisto by the local demons.[1]

After Johnny Blaze usurped Mephisto's vacant throne back in Hell, the Hell-Lord attempted to return himself and Hotel Inferno to his realm, but he was stopped by Doctor Strange. Following Mephito's defeat, Las Vegas returned to normalcy. Hotel Inferno remained standing, becoming Mephito's prison and the city's biggest attraction.[2]

As new King of Hell, Johnny faced problems in ruling Hell since some of the demons escaped and entered Manhattan. After his brother Danny Ketch refused to help him, Johnny went to Hotel Inferno to take Mephisto with him to rule Hell properly. In spite of Wong's warning, Johnny overpowered him and broke Mephisto free from the prison.[3]

Like this? Let us know!
Retrieved from "https://marvel.fandom.com/wiki/Hotel_Inferno?oldid=5839013"
Community content is available under CC-BY-SA unless otherwise noted.