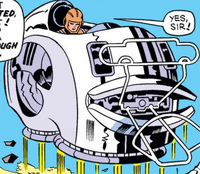 The "Hound Dog" was the newest piece of ground-sonar equipment available to the United States military. It was able to rise on air jets and shoot out metal sensors, probing the ground with electronic impulses, which sent back echo images of what lay beneath the ground. It was utilized by General Argyle Fist in the Southwest as he searched for missing soldiers and superheroes[1].
After probing for several hours, the Hound Dog finally found some results, but the craft was immediately attacked by the Royalist Forces of America, and its pilot was taken hostage. The Army found the craft wrecked[2].

Retrieved from "https://marvel.fandom.com/wiki/Hound_Dog?oldid=4204677"
Community content is available under CC-BY-SA unless otherwise noted.