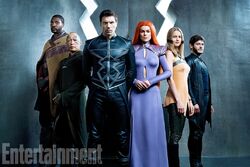 The House of Agon is the royal family of Attilan, a city on the Moon populated by Inhumans. King Black Bolt assumed the throne when his parents Agon and Rynda were killed by Black Bolt's powerful, Inhuman voice. He took Medusa, the daughter of rebels executed by his parents, as his queen, and Karnak and his cousin Gorgon served as his chief adviser and head of the Inhuman Royal Guard.

When Gorgon left Attilan to find Triton after he went missing in Hawaii, Black Bolt's younger brother Maximus launched a coup with the rest of the royal guard behind him. Lockjaw took Karnak, Medusa, and Black Bolt to Hawaii to escape from the coup; however, each of them was left in a different part of the island of Oahu. When Lockjaw returned to rescue Princess Crystal, members of the royal guard loyal to Maximus put Lockjaw into a deep sleep and imprisoned Crystal in her own apartment. Soon afterwards, Maximus forced the Genetic Council to support his claim to the throne, and announced his position as Attilan's new king to the city's people.[1][2]

Like this? Let us know!
Retrieved from "https://marvel.fandom.com/wiki/House_of_Agon_(Earth-199999)?oldid=6100287"
Community content is available under CC-BY-SA unless otherwise noted.