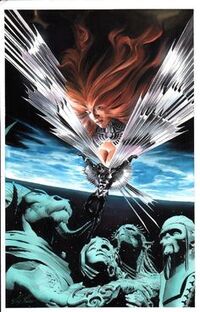 Base of Operations
Formerly Attilan
Affiliations

The past history of the Inhuman Royal Family of Earth-9997 continued much as it did on Earth-616, however it appeared at some point in history the Inhumans returned Attilan to the Himalayan mountains. The reason behind this move was unknown, however it's possible that the Inhuman nation began to grow tired with living on the Moon. Eventually, the Inhuman population grew tired of living in seclusion and decided to leave the Great Refuge to forge new destinies among humanity. This happened at a time when Maximus was once more vying for power. Maximus had built a bomb that - once detonated - would release the Terrigen Mists into the Earth's atmosphere. The Inhuman Royal Family would stop Maximus from doing so, Medusa killing him. With no kingdom to rule over, the Inhuman Royal Family decided to take to the stars and find their fate elsewhere in the universe. However, Black Bolt felt that his people would be persecuted and demonized by humanity, much like they treat mutants on the outside world, and as such Bolt decided to unleash the Terrigen Mist bomb filling Earth's atmosphere with the gas. This was unknown to all, including the Watcher, whom Black Bolt had blinded to prevent him from seeing. It has been suggested that Black Bolt had some intimate knowledge about the Celestials' plans for the Earth, and releasing the Terrigen Mists on the Earth was a way to set plans in motion to stop the Celestial birth in Earth's core.

Black Bolt's action effectively caused almost all the humans on Earth to become Inhumans, mutations happened on a global scale causing a major global crisis. Economies fell, food became scarce, and the world's governments crumbled, most world leaders being replaced by long time super-humans who had experience with having super-human abilities.

In space, the Inhuman Royal Family mutated further as well, it is unknown if this was a natural evolution of their powers, if it was triggered by their new environment in space, or further exposure to the Terrigen Mists. Whatever the reason, each member of the Inhuman Royal Family (with the exception of Luna who remained human) saw their Inhuman abilities increase. Gorgon and Triton would become more animal like in appearance, Karnak's head would increase in size and his mastery at finding flaws would envelop every aspect of his being, Medusa would grow more hair, and Black Bolt became something even more powerful, and less human all together. It appears that the Inhuman Royal Family are the only Inhumans that saw an increase in their mutation during this point in history, as all the long time Inhumans on Earth appear to have remained the same.

The Inhuman Royal Family returned to Earth after they saw the fate of the Eternals. Approaching the planet when the Eternals took as a home when they had left Earth, they found that the planet was destroyed from within and all the Eternals were encased in Vibranium. It was later revealed that the Eternals had the bad luck of settling on a world that was impregnated by the Celestials that had come to term. Fearing that the Earth could suffer the same fate (half-correctly believing that Vibranium was the cause) they returned to Earth looking to warn Reed Richards, and also to gather the members of their race, specifically their son whom they had left behind. Arriving on Earth, they found that everyone on Earth had mutated and everyone (except for Black Bolt) wondered what caused this. Also on Earth, they found Reed Richards and learned that Richards had taken up the identity of Dr. Doom following the death of Doom and his wife, and that he blamed himself for the mutation of all humanity. Richards (incorrectly) theorized that it was his Vibranium energy beacons -- devices he installed all over the world to try and solve the energy crisis -- that caused the mutation when a malfunction caused one of the beacons to explode, and transmit the fall out all over the globe. Agreeing to find the lost Inhuman nation, Reed reconfigured Charles Xavier's Cerebro machine to track down the Inhumans. Reed quickly found out that every mutate on the planet was registered as an Inhuman, and taking this information back to the Royal Family they learned the truth and realized that Black Bolt had unleashed the weapon which his brother Maximus had created.

Ultimately, X-51 (who had been selected by the Watcher to record Earth's history since being struck blind) revealed to Reed Richards the truth of the Celestials' plans for humanity, and that the Final Host was coming to Earth to pass final judgment on the planet. Black Bolt was the first to tackle the Celestials alone, however this proved to be a distraction. In his dying breath, Black Bolt called for Galactus, as Galactus was revealed to be the counterforce in the universe insuring that the Celestials would not over breed and take over the universe. Galactus (in reality, Franklin Richards, mutated into a new Galactus following the death of the original) fought off the Celestials who came to Earth.

Following the defeat of the Celestials, and the destruction of the embryo growing in the Earth's core, the Inhuman Royal Family was taken to Medusa and Black Bolt's son Ahura, who had been left in the care of King Britain and trained to be the new Black Knight. Given a new costume made out of Vibranium modeled after his father's own costume, the new Black Bolt refused to lead an entire planet of Inhumans, choosing servitude over royalty. Black Bolt the 2nd ended up becoming one of Earth's champions, leading the Iron Avengers on various missions. In addition, Bolt's planned wedding to Luna (who had now mutated into a new form thanks to her exposure to the Terrigen Mists) did not come to pass, as Bolt had no interest in marrying Luna.

Medusa and King Britain eventually agreed to marry to unite the Inhuman and human nations into one unified monarchy. This plot was almost foiled when Mephisto used his powers to free Meggan, Britain's first wife who had been trapped in stone for years following a battle with the Grey Gargoyle. Meggan eventually sacrificed her life trying to stop Mephisto from rallying an army of Deviants to take over the Earth.

Retrieved from "https://marvel.fandom.com/wiki/House_of_Agon_(Earth-9997)?oldid=5547839"
Community content is available under CC-BY-SA unless otherwise noted.