1. "The House That Xavier Built"

I have a new word for the lexicon of man: KRAKOA. And in the future, when you speak it, make sure you do so softly and with proper deference. For we will be listening.

Appearing in "The House That Xavier Built"

Synopsis for "The House That Xavier Built"

On Krakoa, Professor X stands over golden pods that birth full-grown mutants whom he welcomes into the world.

Over the course of several weeks, mutants have planted exotic flowers across the world and as far away as Mars. At the Jerusalem Habitat, ambassadors from several nations meet where one of these flowers has in two weeks grown to engulf a building. Magneto and the Stepford Cuckoos greet them and give them a tour.

In Westchester, Marvel Girl leads a group of young mutants through a portal to Krakoa, where Cypher and Sage are establishing the technological backend of a new mutant habitat.

Miles from the surface of the Sun, a coalition of humanity's intelligence agencies and scientists have formed Orchis: a last defense for Homo sapiens against mutants. There they are constructing a Mothermold on their space station.

At the Damage Control Contested Storage, Mystique, Sabretooth, and Toad break in to retrieve some data and are intercepted by the Fantastic Four. Mystique and Toad escape, but Sabretooth is captured and moments later Cyclops arrives to take him into custody: he explains that all mutants have global amnesty from human law and will be taken to Krakoa. Mister Fantastic finds this unacceptable and rather than fight, Cyclops acquiesces and extends an invitation to Krakoa to Franklin Richards.

The two criminals that escaped have teleported to Krakoa, where Magneto has explained to several of Earth's nations that mutantkind is now a new nation: they are sovereign and will not accept any demands or even negotiations with humanity.

Superstar writer Jonathan Hickman (SECRET WARS, AVENGERS, FANTASTIC FOUR) takes the reins of the X-Men universe! Since the release of Uncanny X-Men #1, there have been four seminal moments in the history of the X-Men. Giant-Sized X-Men. X-Men. Age of Apocalypse. New X-Men. Four iconic series that introduced a new era for Marvel’s mutants and revolutionized the X-Men. In House of X, Charles Xavier reveals his master plan for mutantkind…one that will bring mutants out of the shadow of mankind and into the light once more. 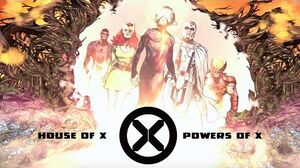 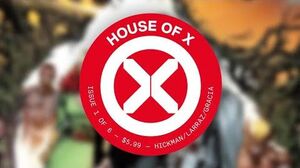