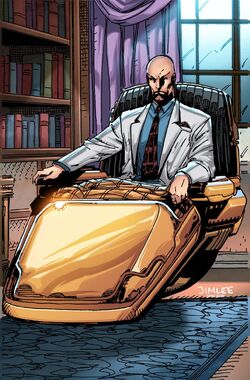 Designed by Forge, the hoverchair served many of Professor Charles Xavier's needs, transportation being only one factor in its number of amenities. After defeating the alien, Lucifer, Lucifer dropped a huge stone block on Xavier, crippling his legs, in retaliation. Charles was sentenced to a wheelchair for the rest of his life. Ironically, Professor Xavier regained his ability to walk, after Dr. Moira MacTaggert and the X-Men's space-faring allies, the Starjammers, saved him, by transferring his mind into a newly cloned, somewhat younger, body. After an extended sojourn in space with the Starjammers, Professor Xavier returned to Earth and both the original and third teams of X-Men reassembled under his leadership. The Professor was injured again, this time on the Astral Plane while battling the Shadow King to release control of his son, Legion, and crippled again. At this time, Prof. Xavier asked Forge, a mutant with an unusual talent for inventing mechanical devices, to upgrade his technology and include Shi'ar technology.[1]

Due to Forge's tech-savvy abilities, the chair was first designed with comfort in mind. Its capability of levitation allowed Professor Xavier to negotiate any surface with relative ease. The chair had also been noted for not being strictly exclusive to hovering above the ground, once exhibiting the capacity to float several yards above the surface. On either side of the armrests were panels to an intricately integrated terminal directly networked with Cerebro, the Blackbird (later re-dubbed the X-Jet), a multitude of communications and all other technologies developed by X-Corp. Professor Xavier never used the chair in public, so as to not alert the public of his technology and connection to the X-Men.[2]

Professor X abandoned his hoverchair, for a less advanced wheelchair.[3]

Retrieved from "https://marvel.fandom.com/wiki/Hoverchair?oldid=5727295"
Community content is available under CC-BY-SA unless otherwise noted.