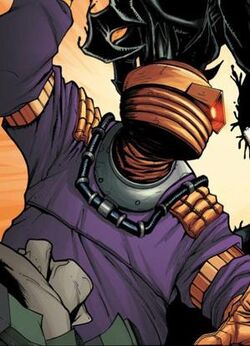 As the spider said to the fly, "welcome, suckers!"

Howard Mitchell was the owner of an armored truck company, but was unsatisfied with his personal profits. He decided then to steal his own trucks. To do so, he created a customed identity including own-developed technology. He would use a knock-out, amnesia-inducing gas he knew in a voyage to Peru, used a gas-proof mask, and became the Hijacker.

As the Hijacker was familiar with all of the secrets of Mitchell's company, he managed to perform four successful thefts. He never killed a witness, because witnesses could not identify him due to temporary amnesia. The police was unable to stop the Hijacker. Mitchell, feigning anger, demanded the help of a super-hero: Ant-Man (Hank Pym). Mitchell felt that such a small hero could be no threat to him.

The Ant-Man in turn understood that someone in the company was helping the Hijacker, or was the Hijacker himself. After seeing some Peruvian statues in Mitchell's office, he related them to the Peruvian gas used by the Hijacker and immediately suspected of Mitchell. Thus, the Ant-Man pretended to suffer from appendicitis and in secret hid in one of the trucks: In other case, the Hijacker would not attack.

The Hijacker attacked the truck believing that he would not have to fight, but he met the Ant-Man, who was using a gas-proof mask of his own. Ant-Man fought the Hijacker, defeated him and revealed he knew it had been Mitchell all the time. Mitchell was then sent to jail. [1]

Mitchell eventually escaped o was freed, and decided to change his modus operandi: The Hijacker would steal technology and re-sell it in black market auctions. He tried to steal Anthony Stark's designs at Stark West, but he met with Black Goliath and the Thing, who were performing some tests. Hijacker understood he was no match for both of them together, so he escaped and returned with a new trick: His own armored tank. Nevertheless, in a fight, Black Goliath and the Thing destroyed the tank and captured the Hijacker. When the Hijacker tried to reveal his real name (probably thinking that cooperation would reduce his term), the Thing showed little interest on anything he could say.

Months after that, the Hijacker discovered that the Thing was hospitalized due to injuries caused by Gladiator and the Champion of the Universe. It was a great chance for getting his revenge on him. Other villains had also thought about it, but in fact superheroes who were the Thing's friends had thought of that, and gathered in the hospital to protect him. Although the Hijacker used a new tank in the attack, it was destroyed by Iron Man, who also apprehended him.

Free again through unknown means, the Hijacker was contacted by Gary Gilbert, a former customed criminal turned into business agent for criminals. Gilbert was worried about the Scourge of the Underworld, a masked figure who was killing customed criminals such as Gilbert and Mitchell. Gilbert organized a meeting in the Bar with No Name, Medina County, Ohio, to discuss potential counter-attacks. As the Scourge was known to use weapons instead of powers, weapons were to be left at the door, leaving Mitchell helpless. However, the Scourge infiltrated in the meeting disguised as the bartender and shot down all the seventeen criminals (including Mitchell) wielding a cut-down .50 submachine gun in each hand.

After Spider-Island, Mitchell decided to rob a bank with his truck, but was chased by Venom after he ran over a security guard. During the pursuit, Hijacker squashed a mother and his son, killing them. Enraged, Venom hid in Hijacker's truck and faced him in his hideout. He broke Hijacker's fingers, hit him many times and bit his head off before spitting it out.[2]

Knowledge of high technology and of Peruvian culture. He had practised shooting his vario-blaster.

A gas mask to protect him from gas attacks, with an oxygen supply of 4 hours. His costume provided energy to the weapons, and the reinforced tissue protected him against most forms of attack.

The Hijacker used three different armored tanks during his carer:

Like this? Let us know!
Retrieved from "https://marvel.fandom.com/wiki/Howard_Mitchell_(Earth-616)?oldid=5657607"
Community content is available under CC-BY-SA unless otherwise noted.