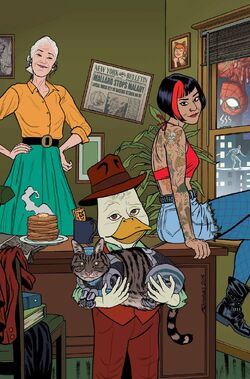 Howard returned to his business as a private eye, working in the same building as She-Hulk, in Brooklyn. One of his first new clients was Jonathan Richards, who hired Howard to retrieve a necklace stolen by the Black Cat. With the help of Tara Tam, a new ally, Howard managed to recover the necklace, but in his way to give it back to Richards he found himself kidnapped by the Collector,[1] allied with the Guardians of the Galaxy to escape the villain's collection,[2] and confronting the Ringmaster, who had been hypnotizing old people into robbing for him.

After recovering the necklace for a third time, Howard was approached by Richards in the middle of his fight against the Ringmaster, and Richards revealed himself to be Talos the Untamed.[3]

Retrieved from "https://marvel.fandom.com/wiki/Howard_T._Duck_Private_Investigations_(Earth-616)?oldid=5547864"
Community content is available under CC-BY-SA unless otherwise noted.