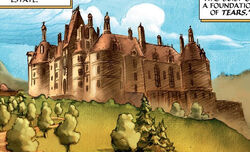 My name is James Howlett and this is where I was born. This is also where I died.

Built from a fortune made in copper ore, the Howlett Estate was said to be built on a foundation of tears and was believed to be bad luck by the servants who lived and worked there. This standing is based on an incident as the elder son of the Howlett Family was killed after his Mutant powers manifested.

Many years later another incident happened which amplified the dispute. The fired groundskeeper Thomas and his son "Dog" Logan invaded the estate. In that incident, the whole Howlett Family got killed except the youngest James and his grandfather. Like his brother many years ago, James' mutant powers were activated in that incident and he had to leave the estate with his childhood friend Rose.

After the death of James' grandfather, the estate was considered to be uninhabited.[1]

During the events of Wolverine: Killable, it was shown that the estate was replaced by a shopping mall. This building accommodated a local museum with pictures of the former farm and its residents.[2]

Before it was torn down, James Howlett (who became the X-Man Wolverine) returned to the estate on rare occasions.[3][2]

Like this? Let us know!
Retrieved from "https://marvel.fandom.com/wiki/Howlett_Estate?oldid=6444034"
Community content is available under CC-BY-SA unless otherwise noted.