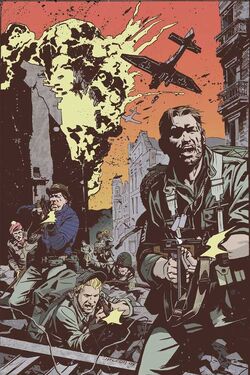 The Howling Commandos, as well as their great rivals, the Second Attack Squad (the "Maulers", led by Sgt. "Bull" McGiveney, with Cpl. Ricketts Johnson), and, later, Jim Morita's Nisei squad were stationed at a military base in England to fight specialized missions. These missions were located primarily, but not exclusively, in the European Theatre of World War II, eventually going as far afield as the Pacific Theatre, Africa, and, once each, in the Middle East and on the Russian front.

The Howling Commandos' earliest assignment occurred in the autumn of 1942. They were to recover British rocket scientist Dr. MacMillan from a German military base in occupied Norway. Their success brought the attention of British Prime Minister Winston Churchill, who incorporated the unit into the British Army, and given the title of "Commandos."

After further training, the unit was dispatched back behind enemy lines in France to recover Free French resistance fighter who was captured by Nazi soldiers. This was a vital rescue mission since they knew the date and time of an impending Allied landing on the beaches of Normandy. With the help of Free French resistance fighters they rescued the man from the Nazis before he could be forced to talk.[1]

After seeing combat in a French coastal town, Fury was called back to base where he was informed that the Nazis were getting ahead in the race to develop an atomic bomb. Posing as sailors the Howling Commandos managed to smuggle their way into Germany to seek out the laboratory in the town of Heinemund where the atomic weapons were being developed. Initially captured, they broke free and realized the only way they could get near the lab was to allow themselves to be captured and placed into a nearby concentration camp. Breaking free, Fury and his Commandos attacked the Germany laboratory, sabotaging the scientists works there. After they fled the exposed rods of nuclear material reached critical mass and destroyed the lab in a massive nuclear explosion. It is possible that this set back is what caused Nazi leader Adolf Hitler to call off any further development of atomic weapons. [2]

The Howlers fought against the likes of German General Erwin Rommel[3] and inter-squad bigotry.[3] Antagonists included Baron Strucker,[4][5] Captain America's nemeses Baron Zemo,[6] as well Adolf Hitler's protégé,the Red Skull, and other Axis villains. The Howlers were some of the first soldiers to see Captain America in action overseas when the Captain helped them to destroy a Nazi rocket research lab. They worked together so well, in fact, that the Howlers were next ordered to accompany Captain America to Wakanda to discover why a Nazi invasion force had been sent there[7]. The Howlers continued to encounter and fight alongside Captain America and Bucky several times throughout the war.[8]

Despite being an elite squadron, they were in constant conflict with regulations due to Fury's unorthodox command style as well as their constant rivalry with McGiveney's Maulers, which caused the squad members to be thrown into the brig on many occasions.[9][10]

They reunited for missions in the Korean War, where Fury received a field promotion to lieutenant, and the Vietnam War, as well as at a present-day reunion gala. Several members of the Howling Commandos have also gone on to spend various amounts of time as a member of Nick Fury's current organization S.H.I.E.L.D.[11][12]

The Howling Commandos later became a Delta Force C Squadron F-Team black-ops unit known for always getting the job done no matter the circumstances or consequences. In Cebu City, a mission went bad resulting in the death of a member codenamed Buzzkill.[13]

In Los Angeles, the Commandos were ordered to go after the Punisher.[14] The Commandos used the Punisher's contact, Sgt. Thomas Tuggs, as bait and eventually tracked him down to his subway hideout. The Punisher almost got away, but a tracking bullet struck him in the torso, wounding him severely.[15]

The Commandos then proceeded to use the Punisher's remaining family members as bait.[16] The bait worked,[17] and Punisher was captured by the Commandos;[18] however, the Punisher convinced their leader, Sidewinder, to free him and stop following orders so that he could get to the bottom of who supplied the Dos Soles Cartel with U.S. Army munitions.[19]

Like this? Let us know!
Retrieved from "https://marvel.fandom.com/wiki/Howling_Commandos_(Earth-616)?oldid=5650190"
Community content is available under CC-BY-SA unless otherwise noted.