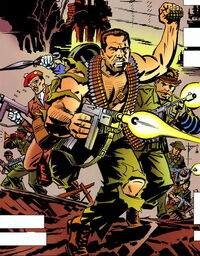 Base of Operations
Paradise; formerly the Realm of the Dead; Able Company Base , England, United Kingdom
Affiliations

The history of the Howling Commandos of Earth-9997 mirrors that of their Earth-616 counterpart. In recent history, the entire team that formed the Howling Commandos are dead. Members who were agents of SHIELD were killed when Norman Osborn created the Hydra, a biological entity based on information he got out of the Bloodstone Files. This biological entity that would take a host body, killing the host but retaining the victims memories and abilities (The better to convince others to join its collective.) These host bodies would eventually be banished to Limbo by Captain America.
The souls of the dead members of the SHIELD would end up in the Realm of the Dead, and have a Howling Commandos reunion of sorts. The members would believe that they are still alive and that those who were still alive are supposed to be dead. They would spend their time fighting endless battles against their old foes who were also deceased. The Howling Commandos would be kept in reserve by Mar-Vell during his final battle against Death. At a crucial moment, Captain America would rally an army of heroes (including the Howling Commandos) to lead a final charge against Death.
Following the death of Death and the creation of Paradise, the members of the Howling Commandos were among the first beings welcome into the realm. They were given shards of the Cosmic Cube to create their own realities to live out for all eternity. They were pulled from these realities when the Kree invaded Paradise. The Howlers aided in stopping the invasion. Following the Kree army's defeat the Commando's fate remains unrevealed.

Retrieved from "https://marvel.fandom.com/wiki/Howling_Commandos_(Earth-9997)?oldid=5547885"
Community content is available under CC-BY-SA unless otherwise noted.