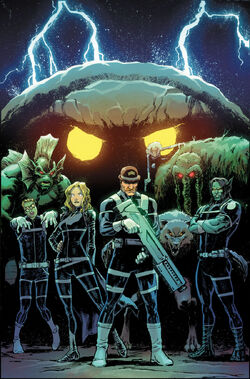 Several years ago, Dum-Dum Dugan successfully petitioned S.H.I.E.L.D. director Nick Fury to create a specialized unit dedicated to the use of paranormal personnel. Dubbed the Howling Commandos in homage to the famed World War II squad, the team set up shop at Area 13 and began acquiring operatives whose strengths and powers were supernatural, paranormal or extra-terrestrial in nature.[2]

Captured beings were given the option to either work as an operative with the Commandos, which came with certain "walking around" privileges, or to be kept in continuous isolated containment at Area 13. While the Commandos' roster often fluctuated to meet the needs of the mission, a core group of operatives soon emerged: Nina Price, the Gorilla-Man, the Living Mummy, Frank, the Zombie, and field commander[3] Vic Marcus, codename Warwolf. Additionally, the team outfitted the monstrous Grogg with advanced technology that allowed the dragon to serve as a living transportation vehicle, piloted by S.H.I.E.L.D. operative "Buzz" McMahon. This team, under the leadership of Dugan and his second-in-command Bradley Beemer, completed many missions for S.H.I.E.L.D., utilizing the "horror, shock and awe" of their unique operatives.[2]

Some time after their formation, the group travelled to Afghanistan and defeated an unnamed group of terrorists and members of technological death-cult the Lords of the Living Lightning.[2] After the mission, Dum-Dum Dugan was replaced as commanding officer by Clay Quartermain, who made a less than stellar impression with the operatives.[4]

The commando's first mission under Quatermain's command was a standard capture operation of alien creature Groot; the team also acquired operative Glob the same day.[4] Around the same time, ancient wizard Merlin broke free from S.H.I.E.L.D. containment and set off an enchantment that sent England into the Dark Ages[2] while collaborating with Daimon Hellstrom (who unbeknownst to the operatives was deep undercover) and the remaining leadership of the Lords of the Living Lightning.[5][6] Operatives Nina Price, the Vampire by Night, and Lilith Drake were sent in undercover to spy on Merlin's activities.[5]

Merlin soon attacked Area 13, unleashing an army of mythical creatures into the base.[6] With the active operatives overpowered and the base overrun, Beemer activated the "stampede protocol", unleashing all of the contained assets of the base, effectively turning the tide of the fight.[7]

While the Commandos made preparations to infiltrate Merlin's camp, Lilith attempted to double cross him, but failed and was burned alive. Quartermain then called in a favor to the Mole Man to use his city-moving technology. As the Mole Man raised the city above the surrounding landscape and the Commandos launched their attack, Warwolf and Gorilla-Man cornered Merlin, only for the wizard to teleport away. After the battle, it was revealed to the Commandos that Lilith survived, and that her role in the mission was to assassinate Merlin, should capture not be an option.[8]

The subsequent activities of the team were not recorded.

The new team's first mission saw them securing the Earth Idol of Golthana from a tanker ship after it mutated the crew into mindless humanoid plant creatures. While successfully defeating the crew, they failed their main objective when Man-Thing's destruction of the creatures caused the idol to incinerate.[9]

At the time when Hydra took over S.H.I.E.L.D. and most of the United States, the Howling Commandos alongside S.T.A.K.E. fell under Hydra's control.[10]

Like this? Let us know!
Retrieved from "https://marvel.fandom.com/wiki/Howling_Commandos_(S.H.I.E.L.D.)_(Earth-616)?oldid=6495459"
Community content is available under CC-BY-SA unless otherwise noted.